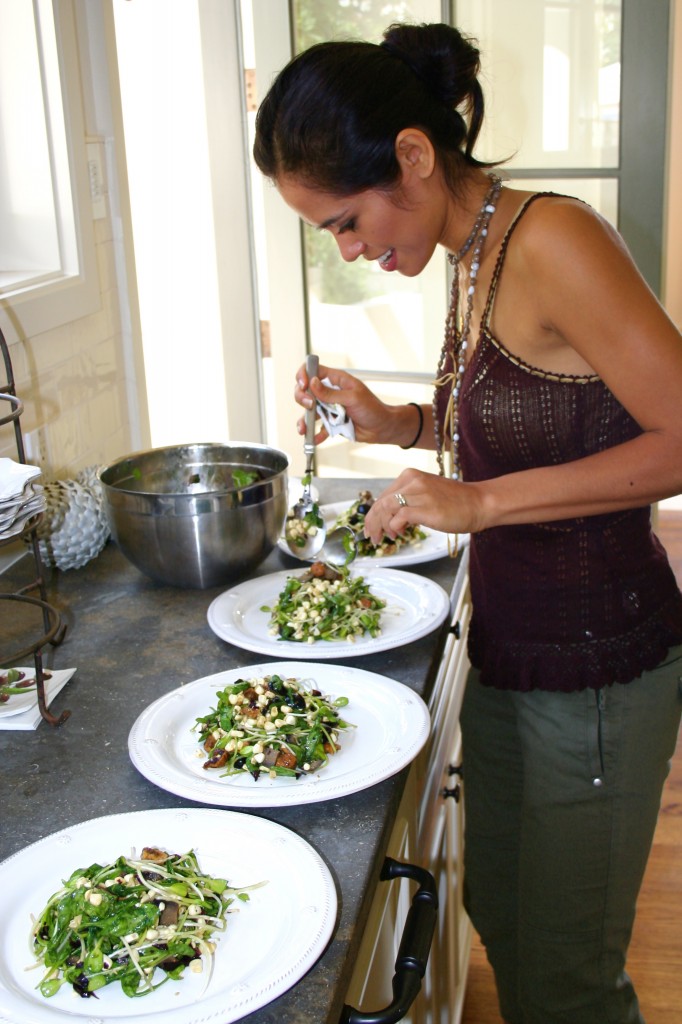 So here I am at the end of Emmy weekend, and I have survived!!!!!!!! I am in LA, and with the Emmy’s and all, I was running around a lot and making a lot of meals and snacks for various people. Now I am exhausted and about to pass out… and I don’t have to make another meal for people now until …Tuesday! 🙂

So I wanted to mention to you guys that one of my new, seasonal ingredients that I’ve been working with is raw, organic sweet white corn. I’ve really slammed corn in the past (see my blog “When Good Veggies Go Bad”)- but that is the commercialized, pesticide-ridden, government-subsidized kind of corn that is produced in ginormous quantities, much of which eventually gets turned into high fructose corn syrup or feed for animals in factory farms. The kind of corn I’m talking about it is in season right now, and you can pick it up at your local farmer’s market or a health food store. Make sure that the white corn you get is organic (!!!) and local, if at all possible. You only want corn that you can eat shortly after being picked, otherwise it will become too starchy. Corn has a lot of fiber- but most people cook it, grill it, steam it, make some variety of corn on the cob!! You don’t need to cook organic white corn. In fact, it would be a great idea not to, especially in my taco salad recipe, since if you keep the enzymes intact it will digest much easier. You can just shuck it and then carefully saw the corn off each side with a long knife. Corn has some vitamins, like Vitamin C, which will be preserved if you eat it raw. It is just a great ingredient to spruce up a salad here and there. I particularly like it with dulse (sea vegetable), which provides an organic sodium source, and onions chopped up in a salad.

One day, I took a break after making lunch and went to the pool for a little bit…

And admittedly, I think I put my face down in this fluffy grass and passed out for a little bit! It was a glorious day, and…

After all, on this particular day I  was making food at THIS HOUSE!!! Today, after everything, I made it back to Santa Monica beach, where I am staying, in time for the sunset!!

And got a great meditation in. I didn’t even watch the Emmy’s tonight. 🙂 Ssssshhh don’t tell!

Hope you had a great start to your week!!!!