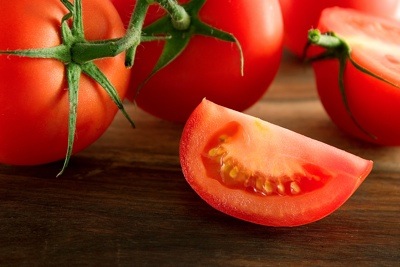 If you’ve never had an organic, in-season, local tomato fresh off the vine, then there’s a good chance you’ve never had a real tomato. The tomatoes you can find in a grocery store may look clean and pretty, with a uniform color and unblemished skin. But they tend to taste a lot like cardboard with a texture that is mushy and unpleasant. This is not how nature designed tomatoes!

Fresh, organic, heirloom tomatoes, on the other hand, are delicious with amazing sweetness and a rich flavor. If you’ve noticed this discrepancy between the luscious flavors in a locally grown, in-season, organic tomato and those you find in grocery stores, science now backs you up.

A recent study showed that genetic manipulation and breeding of tomatoes to produce a more uniform color and appearance had some unintended negative consequences: the tomatoes are devoid of flavor. It turns out that the genetic manipulation of tomatoes leads to significantly lower amounts of natural sugars and chloroplasts (structures that turn sunlight into energy).

You may think, “Big deal. So tomatoes don’t taste as good as they used to. Who cares?”

In fact, it is a big deal. Food without flavor is unsatisfactory food, and it can cause people to display a number of unhealthy behaviors such as:

Tomatoes are a very healthy food. They contain: 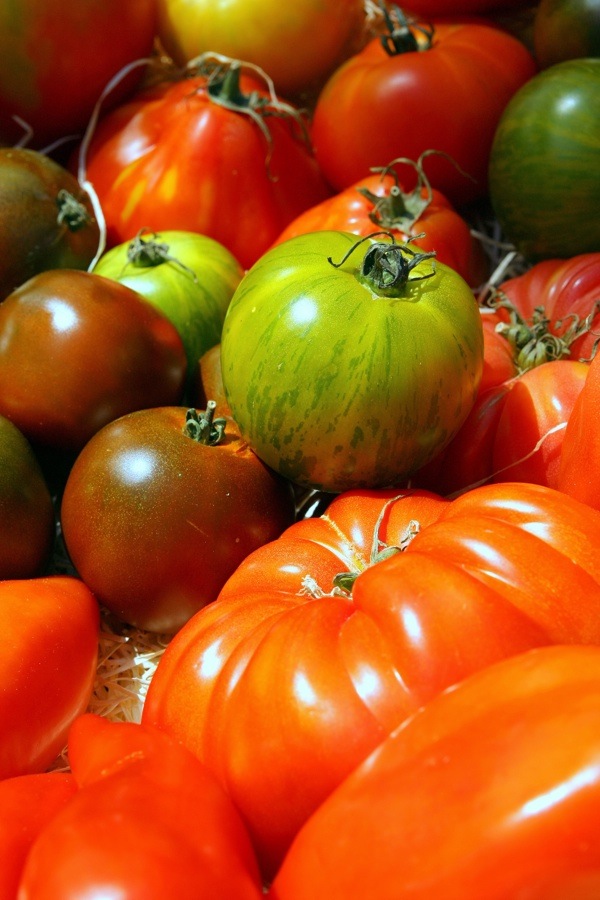 Other fresh fruits and vegetables you find at the grocery store also suffer from a lack of flavor and inferior texture. Many of the “fresh” vegetables you purchase in grocery stores have been bred for uniformity and mass production. As a result, you wind up with sub-par flavors that just don’t satisfy, have less nutrients and overall nutritional value, and usually a nasty, non-crisp texture to boot.

I know many people who tell me they hate vegetables. I just started work on a new film in Atlanta this week, and last night we all sat down to dinner. My client’s assistant looked at the kale and sprout salad that I put before him like it was dripping alien slime. I assured him, “Don’t worry, there’s other food coming as well. But why don’t you try the kale?” To which he did, and actually liked it. He admitted he grew up avoiding  greens at all costs. But when reintroduced to something fresh and prepared well, he actually liked it.

So you see, when you finally eat local, fresh, seasonal produce picked at the peak of ripeness, you may suddenly realize that it isn’t vegetables you don’t enjoy – it’s what we often pass off as vegetables at the supermarket. Never is this more apparent than with a tomato.

If you think you dislike tomatoes, try stopping by your local farmers market and visit a stand that sells fresh, organic heirloom tomatoes when they are in season (like now!). Buy one, and try a slice. I’m betting it will be as much of a revelation for you as it is for many other people who believed they disliked tomatoes until they tried a fresh, organic, heirloom variety. These tomatoes are sweet, juicy, and packed with a rich, unbelievable flavor.

This is why I am such a fan of eating locally grown, organic produce that is in season. Not only do these foods lack the pesticides and chemicals that can make your body toxic, but they also tend to be fresher, taste much better, be more satisfying, and pack a powerful nutritional punch.

I get that eating local and seasonal can be difficult, particularly if you live in an area that has a relatively short growing season. Still, even in extreme climates you can take advantage of seasonal fruits and vegetables while they are available.

One of the best ways I know to eat locally and seasonally is to participate in local farming efforts. Whether you do this by regularly visiting your local farmers markets and produce stands or joining a community supported agriculture program, you’ll be able to enjoy the freshest seasonal produce for several months out of the year.

I particularly like community supported agriculture (CSA) programs. When you join a CSA, you purchase a “share” in a local organic farm. In turn for paying a monthly fee (usually ranging anywhere from $50 to $250), you’ll receive a box of freshly picked produce every week. With each box of produce, you can plan seasonal menus that require minimal preparation for flavorful, nutritious meals. You can find local CSAs, farmers markets, and produce stands by visiting LocalHarvest.org.

Of course, you can also grow your own produce at home in gardens, raised beds, planter boxes, and even on your counter top. When growing tomatoes, pick heirloom varieties for the best flavor. With the upside down tomato planters, you only need minimal space to grow wonderfully flavored tomatoes.

Eating fresh, local, in season produce is a boon not only to your health, but also to your taste buds. If you often find yourself feeling dissatisfied after a meal, try eating seasonal, local produce. Chances are you’ll love it so much you’ll start eating more veggies at meals than you ever imagined you would!

When I think of tomatoes, I think south of the border; try out one of my latest recipes, the raw taco salad recipe!