Could Junk Food Save the World? It can be tough to give up, or even be confronted about bad habits. It can make us all feel a bit squirrely, can’t it? Food-wise, if often comes down to a reductionist mentality where the one confronted may rattle off something numbers based, like, “This food’s not so bad. Look at what vegetarians/vegans eat. Look at all that fat, all those calories! All those nuts and oils and fake meat! My fast food’s just as good, and it’s cheap enough for anyone to afford.” It’s a biased point of view, and it compares the worst of the vegan foods–not whole grains, fruits, vegetables, and a little healthy fat–to junk foods.

And as I’ll say over and over again, achieving superior health isn’t about adding up a bunch of numbers, or trying that diet by blood type you just heard about. It’s not as simple as that, and there is far more going on with the intricacies in nature to make a natural food nourishing for your body. Sticking to whole foods always wins. Period.

But let’s see what’s up with the noise out there.

While the author of an article in The Atlantic did make some good points. It’s true that not everything that vegan restaurants serve qualifies as health food and can be high in fat, and you do need to pay attention to what you’re ordering if you go to one. Things like cashew cheese and vegan butters and mayonnaise products, for instance, will skyrocket the fat content of your meal, raw or processed. But he also doesn’t seem to realize that not all vegan diets are the same when he compares them to junk food. No sir. I do not eat, or advocate eating, any of the aforementioned foods (as I talk about in the Beauty Detox books, I consider cashews a once in a while phenomenon. They can have aflatoxin mold like peanuts, are rarely if ever truly raw, as they have to be steamed out of their shells, and there are far more beneficial nuts out there you can stick to). The author also seems to suggest that people, once educated about food and health, still won’t want to change, regardless of whether the healthier options are affordable and available. Are the majority of people just sheep, following their tongues to the next salty, fat-and-sugar-laden meal without a second thought of their health and how it feels to walk from their home to the convenience store (or the mailbox)? Or do they just eat what they know? What came first in this highly-processed diet filled to the brim with animal products—the chicken or the egg? And where does the cycle end?

He claims it ends with junk food. I know. It sounds ridiculous but first hear the guy out. He believes that junk food will save the world, lessen the obesity crisis, and make people healthier much more effectively than the whole foods movement because it reaches more people, slashes their calorie intake and adds more nutrients without changing the flavors and textures they eat (for example, there are additives that can feel like fat in the mouth but act like fiber in the body). Think about artificial sugars that were meant to cure the world of the negative effects of sugar without asking people to give up sweets…there are serious and dangerous side effects to using them that we weren’t aware of before. Because…THEY. AREN’T. REAL. FOOD. So it begs the question: why would these additives, aka fake foods, be any different?

There’s no defending man-made, processed “junk,” whether it’s a hotdog at a stand or a glob of cashew cheese or a seitan-based entity on a dish of refined pasta at an upscale vegan place. Ick. There’s no way a diet of “foodlike substances” (to use the Michael Pollan term that this writer referenced with contempt) that have been cobbled together with a dash of vitamin C here and a dose of zinc there, can come anywhere close to the perfect food that nature’s provided for us. There is so much to be said about the healthiness of whole foods that it’s nearly impossible to break them down into their smallest parts and then recreate something new and healthy with the help of bleaching agents, additives, and machines. Reductionism will never equal whole and complete health, something that is so simple but profound, touted by one of the top nutrition scientists, T. Colin Campbell, PhD. After decades of experimentation on the micro elements of foods, he too concludes that the benefits of whole foods can never be adequately deduced that way into parts, they have to be seen as holistic foods.

Junk food in fancy clothes is never the answer, whether it’s coming from McDonald’s, the convenience store, or one of the vegan restaurants the author of The Atlantic article visited.

Can’t See the Forest for the Trees

Instead of seeing the big picture, people who say junk food is as good for us as certain vegan diets (or that vegan diets are just as bad as junk food) are often looking at the minutia of food—the calories, the fat, the protein, the vitamins and minerals—without considering whether they’re empty calories or what kind of fat’s involved. They also overlook the fact that some balanced vegan/vegetarian diets are low in fat and never recommend large quantities of high-calorie and high-fat foods, especially when there’s a potential for consuming harmful molds along with them, like there is with cashews. They shouldn’t be consumed even remotely regularly. When you eat the Beauty Detox way, you don’t even have to count calories or fat grams because you’re filling up on high-quality produce. I don’t believe we were ever meant to micromanage our diet by adding up numbers all day. If you make fresh, varied and whole food choices, nature will do the math for you. Your stomach is full, you’re satisfied, you learn not to seek out those man-made high-salt, high-sugar, and high-fat flavors, and you lose weight without the hassle of agonizing over the calories. Some meals may look close to the same on paper where calories and macronutrients are involved, but there’s so much more going on beneath the surface where your vitamins and minerals—and how your body uses them—are involved.

Some Vegans Eat Junk, Too

I won’t deny that some vegan pre-packaged foods and restaurant meals are junk. Not all diets without animal products are also free of refined carbs, sugars, and excessive fats. They’re processed junk that no one should be eating, and “vegan” or “vegetarian” doesn’t always mean healthy. These foods (foodlike substances) aren’t fair representations of many of the life-changing whole food, raw food, and vegan/vegetarian diets out there, whether they were representative of the choices on the menus or not.

There are decadent (and yes, often expensive!) foods, treats, and “junk foods” for vegans, too, and the author chooses those to make his comparison between the “elite” life and the life of the poor, to demonstrate how McDonald’s is no less healthy than vegan fare. However, with diets like the Beauty Detox, you don’t eat expensive kale chips saturated in cashews or fake chicken-like seitan products, or refined gluten and flour-filled products, and there are lots of easy items to prepare at home (not all of them are time-consuming!) so you’re aware of what you’re eating.

Someone turning to fast food or convenience store pre-packaged snacks for most of their food will devour much more fat (and not healthy fat!) and more calories over the course of a day than a Beauty Detoxer or a vegan who focuses on whole foods, and they wouldn’t save that much money, either.

Healthy Eating on a Budget

The article says it’s difficult to get good produce unless you’re one of the “elite,” implying that you need to be someone who has plenty of money to spend on an exorbitant grocery bill to have a healthy diet. That’s just not true. Here is how to eat healthy on a budget.

Another thing to consider when you try to make the switch to eating more fresh produce and less pre-packaged junk food is this: plan your meals before you shop. If you’re using part of a head of lettuce for a recipe and then have to throw the rest away because you don’t remember to use it or you go buy convenience foods, you’re going to spend a lot of money you don’t have to.

If you plan ahead so that you’ll use up whatever you buy, you may even find yourself spending less per meal (take a look at my Ananda Burrito recipe, for example. It’s $1.67 per serving. That’s less than $10 for lunches to cover a work week.). Even if you can’t find things like nutritional yeast locally, you can add your own fresh ingredients or spices to make it taste delicious.

Should People Be Tricked or Educated? Another thing I don’t like about the premise that “junk food will save the world” is that people are still not learning to take control of their own health, and instead it—and the obesity crisis—is being left up to labs and companies that largely contributed to the whole mess by working to get people addicted to their foods in the first place.

Do these people who eat junk food all the time need to be “tricked” into eating supposedly healthier foods as some of the information in that article suggests, or do they merely need the education that would allow them to make the best choices available, and understand why they’re making them?

There is one point on which I agree with the author—starting small, with healthier food choices can be a great starting point for people to make permanent, big changes, even if they are not ready for a complete diet overhaul overnight. But people need to realize that they’re making these changes, understand why they’re making them, and know the next step they’re striving for (not seaweed-laden cheeseburgers!). They also need the encouragement to keep going until they feel the benefits of the healthier choices.

The changes made within the fast food industry to cut calories and therefore (hopefully) lower the obesity rates may be a fine place to start, but people eating this way still won’t be healthy; they’ll just (maybe) be smaller. 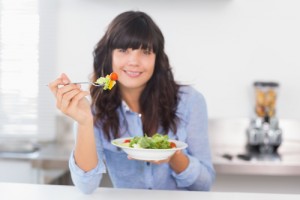 People don’t have to be perfect in their diet to get some of the benefits of a healthier lifestyle, and their weight doesn’t have to be controlled by the whims of the fast food and junk food industries or lab experiments that create flavors and certain mouthfeels. They simply need to have the education—what’s good for you and why, how to procure produce for less, and how to prepare and store it—and start small on their own, because they want to feel and look better. The junk food manufacturers’ attempts may be a good start in making people lose a little weight, but (but!) let’s be real and just say it outloud: junk food definitely will not “save the world.” The end!