Since Bubby has been born (11 months ago now!), I’ve dived into a whole new world with infant nutrition! I have to say that this new journey has been fascinating, exciting… and very wonderfully messy, that is for sure. ☺

I do think that above all, it is critical that all moms follow their own instincts. All moms are given copious amounts of unsolicited advice, told this and that, made to hear out unasked for stories and opinions of countless others…but the reality is that each mother has her own true inner compass. She is most connected with her child!

My little papoose!! Do what feels good for you and your baby! ❤️

Of course, reading around and being informed is important, but ultimately we as Mamas make the decisions as to what we think is best. As an example, I had no idea what kind of “mom style” I was going to employ, and to be honest, I didn’t think about it much until Bubs was actually born. But I did naturally gravitate to holding him and being with him pretty constantly (including co-sleeping in our room), which is along the lines of attachment parenting.

I’ve only put him in a stroller exactly one time- last weekend- when his Dad wanted to push him along. The other 99.9999% of the time he’s been in the carrier with me- as heavy as he is getting! It’s just what has felt natural to me. But I have a mom friend, Jen, who puts her daughter in a stroller to go anywhere and everywhere. That’s her jam. No bad, no better, just different mom styles! Lil Bub loves his GGS, and getting a green mustache! ;)

And so it is with baby feeding. Bubs loves the Glowing Green Smoothie®, which I do feed it to him nearly daily with a spoon. But other than that, we haven’t done any pureed foods. Around 7 months, we started doing something called Baby Led Weaning, which is what I want to talk to you about today.

It may or may not be right for you, and maybe you are not a mom yet but just curious about what is up with baby feeding, or maybe you are wondering what you might feed your future baby (which is way ahead of my planning, before I had Bubs!). Either and any way, let’s dive in:

What is Baby-Led Weaning?

It is a term popularized by Gill Rapley, a health expert in Great Britain. With Baby Led Weaning (or BLW for short, which is kind of like our GGS abbreviation!), you don’t give your babies pureed foods, whether homemade or commercially jarred, but instead give him or her finger foods. Finger foods are foods your baby can pick up by his or herself, and learn to feed him or herself. The foods are very soft, so even though they don’t have teeth (Bubs only has 2 on the bottom so far), they are able to pulverize the food in pretty surprisingly effective ways with their strong jaws and gums.  Starting at seven months the finger foods I prepared for Bubs were simply steamed broccoli spears (his favorite!), carrots, squash, zucchini, and mostly just whole veggies and fruits cut into spears he can pick up himself.

The reason that I was attracted to Baby Led Weaning is that it is what has been traditionally practiced around the world. Many people in the world do not have access to blenders, so most infants transition to solid foods by eat smaller amounts of what their parents are eating!

BLW also teaches them to chew before swallowing. It gives the precious babies an interactive experience with foods where they can explore different textures and tastes, and very importantly, go their own pace. When you give your baby solid foods to eat themselves, it teaches them self-regulation at an early age. You spoon-feed them purée until you think they’ve had enough, but when you offer them finger foods, they eat until they feel satisfied naturally. This paves the path for a healthy eating foundation! 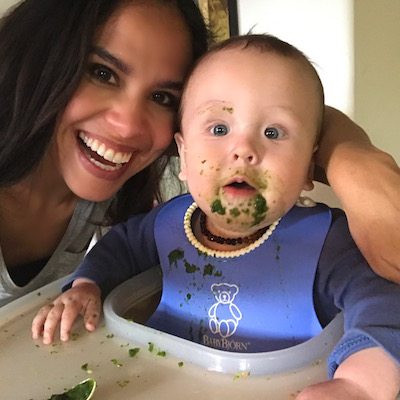 It’s messy, but in a way it’s easier. You just have to steam veggies while you are going about your other business, like making the Glowing Green Smoothie® for yourself.

Plus, I will say that it’s really awesome to eat together. When I sit Bubs in his high chair to eat his bowl of steamed veggies and bananas, I time it so I eat along with him. It’s the beginning of our life-long family meals!

Absolutely. The American Academy of Pediatrics (AAP) are aware of BLW and recommend the best time to start is at six months. By six months babies can usually sit up by themselves and grab onto objects. They have also let go of the tongue-thrush reflex (also called reverse swallow or immature swallow). In fancy language, it’s the tongue protruding through the anterior incisors during swallowing.

To you and me it’s when your baby pushes food out of their mouth. Anyway, by six months that’s usually gone, so it’s generally recognized as the right time. The main source of nutrition for babies until one year is still milk though, so you don’t have to feel great pressure when you start! It’s all about tasting and trying and exploring. We started around 7 months with Bubs, because we were on the road a lot around the 6 month mark, to be honest, and because he wasn’t fully sitting up yet. Make sure your youngin can let go of the tongue-thrush reflex before starting the Baby-Led Weaning.

It can be scary at first. You might wonder, “How is little Mia going to possibly eat foods without teeth? Won’t she choke?” That is the most normal thought in the world and one I had myself. But a publication for the journal Pediatrics found that BLW doesn’t pose a greater risk of choking than traditional weaning methods with pureed foods [1].

Is it a New Thing?

Not at all. Although sometimes seen as revolutionary or controversial, BLW has been around forever and is used widely across many different cultures. That’s part of what I love about it! It seems so, so natural to me.

Personally, I’m for it. I used this method with Lil Bub, my (almost) one year old. He has had no purées except for GGS, and it has worked wonderfully.

There are some BLW purists who wouldn’t go near any purées, but I am certainly NOT a purist and as with all things here in Beauty Detox, I believe that it’s never all or nothing. Find your own routine and what works best for you. You can supplement BLW with purées and mix and match. Watching your baby eat all by themselves is super fun, but if you have a busy day and just want to get on with things, feel free to spoon-feed if it helps speed things up.

As long as they’re happy and healthy, that’s all that matters, right?

What foods work best for BLW?

I’m all about simple, and except for some patties that I made exactly once (that I actually made to test for our upcoming Beauty Detox Roadmap program! ☺), I haven’t made any specific recipes for BLW. It isn’t necessary at all, and I simply personally don’t have the time (though if you do, have fun with it!). I would if he was a picky eater, but so far he does amazing chowing down on simple, steamed whole plant foods (fingers crossed it lasts, but who knows!).

Make sure to steam your veggies and cut them into pieces your baby can easily grab and hold.

Here are some of my/Bubs’ faves:

Note: Wheat and grains work too, but they shouldn’t be introduced at the six-month stage. Many people wait until molars come through before introducing grains, and I don’t plan on giving Bubby any wheat/gluten myself (although as a counter I will say that there are some that believe that introducing foods early is a good way to avoid allergies. Again, go with your gut!).

I also don’t season the food- no salt in particular- which they don’t metabolize well. 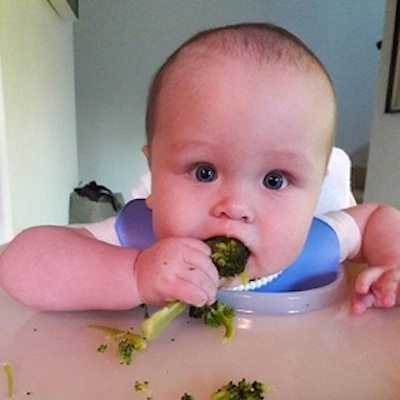 Remember: Wait until your baby is ready for BLW, if you do want to try it! Babies develop at different rates. Don’t worry if your child is seven or nine months before you try it. Just make sure they are sitting up, grabbing objects, and not pushing food out of their mouths. Then they’re good to go!

Also, don’t get frustrated if you offer some foods and they reject them. Keep trying and offering, as sometimes it takes a little while for them to get used to certain foods.

Has your baby or another little one you know tried BLW? What do you think?

Wishing you all the best, and remember I’m always here to support you.

Take great care of yourself. Teaching your baby self-regulation at an early age will start healthy habits that will last a lifetime. Stay healthy and happy. Lots of love from the both of us! ;) Xx