Should You Eat Nightshade Vegetables? I’ve been getting different questions about nightshade veggies (and if you’ve never heard this term, don’t worry, we’ll cover that too!), and I wanted to address it here on the blog.

Well, there is some truth behind the mysteriousness of the term. History tells us that plants from the nightshade family, like datura and mandrake were commonly used for many centuries as sedatives, hallucinogens and truth serums. The book of Genesis in the bible even references how the mandrake was used to overcome fertility issues.

There are even some schools of thought which suggest that it was added to the vinegar Christ was given on the cross as a powerful anesthetic, inducing a coma-like state.

Ancient Sanskrit references to nightshades prove that they have a rich history indeed, but there is still much about them and their properties that is relevant in the present day. What the heck are they, really? Nightshades are actually a very big family of flowering plants ranging from annual and perennial herbs to vines, shrubs, and even trees. From the genus solanum, nightshades include a number of very important agricultural crops, medicinal plants, and spices, in addition to some that are simply ornamental, like foxglove or henbane.

Many cultures consume nightshades in various forms as staple foods, though some are known to contain potent alkaloids, and some can even be highly toxic.

What is it that makes these plants so potent?

Both the medicinal and the toxic aspects of nightshades can be attributed to their alkaloid properties. Mostly nitrogen-based chemical compounds, alkaloids have been found to have a wide range of pharmacological applications in their purified form, and have been used in everything from anti-malarial and anti-cancer drugs to stimulants, psychotropics, hallucinogens and certain poisons.

There are four basic types of alkaloids found in nightshade plants, but not all of them are present in those which we consider food staples. Steroid alkaloids are commonly found in most food nightshades including potato (solanine), and tomato (tomatine). Tropane, indole and pyrrolizidine alkaloids are less common, and known more for their drug-like properties.

Ever wonder why you have always heard that you can’t eat sprouted potatoes? That’s because the glycoalkaloid content is considerably denser in the sprouted areas, and can be harmful. The concentration can actually be up to four times more intense if the potato was stored in the light, which is why potatoes should always be stored in a cool, dark place.

According to Dr. Nora Olsen, an associate extension professor and potato specialist at the University of Idaho, “A potato exposed to light, sprouted or unsprouted, may itself have an increased concentration of glycoalkaloids. If this is the case, the toxic area will turn green. Strangely, that green is not the poison itself but chlorophyll, which is harmless. The green color is, however, a good indicator that that part of the potato may contain higher levels of the poisonous compounds.”

“As with the sprouts,” Dr. Olsen explains, “you can cut the green part off and eat the rest of the potato.”

Hmm… I think even if only “some” of the potato is poisonous I’d rather chuck the whole thing!!

As far as nutrition is concerned, the nightshades may have gotten a bad rap due to concerns about alkaloid content, but it is good to remember that concentration levels in the edible portions of these plants are extremely low, are further reduced by cooking, and should not be allowed to overshadow their health promoting attributes. Packed with nutrition, potatoes are among the most popular of all the root vegetables. In fact, history tells us that this noble tuber served as the cornerstone of nourishment for the Irish population during the bulk of the 17th and 18th centuries.

Low in fat and high in health and beauty-promoting dietary fiber, potatoes are rich in nutrients such as B vitamins as well as vitamin C, and to a lesser degree, vitamin K.

Potatoes are not only an excellent source of healthy, energy-giving complex carbohydrates, they also contain good amounts of certain essential minerals like iron, manganese, magnesium, phosphorous, copper and potassium. Ahhh, the Love Apple! Aptly named, we do love these little guys in everything from salads, soups and juices to sauces, stews and aspics. And why not? They come in countless varieties, one more beautiful and delicious than the next, and their nutritional qualities are almost as numerous.

There are few things more sumptuous than a fresh, organic tomato picked straight from the vine (if you have never done this – try it! I promise it will change the way you think about tomatoes forever!)

Not just another pretty face, tomatoes are loaded vitamin A and K, with powerful antioxidants like vitamin C, lycopene, beta carotene, xanthins and lutein.

The nutrients in tomatoes protect the body from a range of threats, from the damaging effects of free radicals and harmful, aging UV rays to certain cancers like colon, lung, breast and pancreatic, among others. They also support our health vision, skin, mucosa and bones.

Tomatoes are also rich in essential minerals like potassium, phosphorous and calcium which our bodies need to handle such important jobs as strengthening bones, teeth, and supporting a healthy heart rate.

Let’s not forget about all the health and beauty promoting dietary fiber they offer either, helping to keep us clean and beautiful. Also known as the “Mexican husk tomato,” this little guy looks kind of like a cross between a green tomato and a cape gooseberry. Though it looks like its cousin the tomato, you’ll find the flesh is a bit firmer and it has a unique tangy, somewhat spicy flavor to it. Most tomatillos are green with a brownish husk though there is also a purple variety.

*Tip: The husks are easier to remove if you soak them in warm water for a few minutes first.

Tomatillos have many health benefits! They’re loaded with all the antioxidants, vitamins and fiber you find in a tomato, and they are also rich in healthy phytochemical compounds which have natural antibacterial qualities that fight cancer. 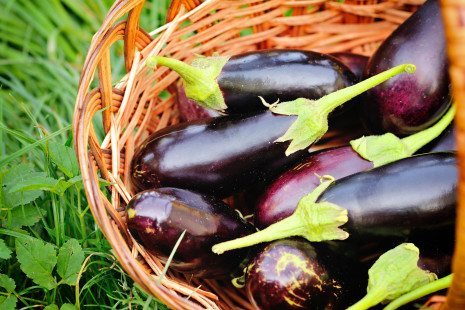 Sometimes known as aubergine, eggplant is known for its nutrition density, meaning that it has a very high nutrient to calorie ratio – not that we’re counting!!

Thought to have originated in India, where it still grows wild to this day, eggplant comes in a number of varieties, sizes and colors. It is widely used in cooking in many parts of the world, featuring heavily in Eastern cuisine.

Eggplant, like so many of the other foods we have been looking at, is very high in health and beauty promoting dietary fiber (something that is chronically lacking in the typical Western diet), providing the necessary bulk to keep the digestive tract healthy and clean.

Eggplant also gives us those important beauty B-complex vitamins such as pantothenic acid (vitamin B5), pyridoxine (vitamin B6) and thiamin (vitamin B1), niacin (B3).

These essential vitamins are not readily available in the body, so we must get them from the fresh foods that we eat to help facilitate fat, protein and carbohydrate metabolism. 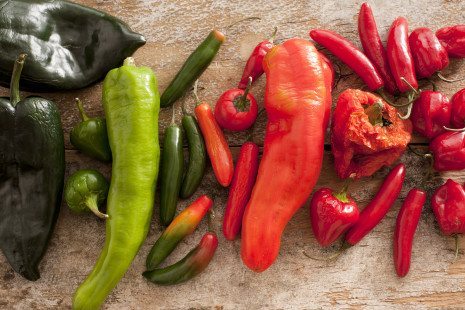 “Peppers” sounds pretty general, but I did say it was a big family! Capsicums – think red, green, and yellow bell peppers, paprika peppers, pimiento, habanero, jalapeño, etc. – are all nightshades.

One bite from a fresh, crisp pepper can yield a taste that is anywhere from bright and sweet in the bell and poblano varieties to hotter than you can stand, like ghost peppers and the world’s hottest pepper, the Carolina Reaper.

Peppers provide us with powerful B vitamins to help convert our food to fuel and keep our bodies energized while keeping our nervous systems healthy, as well as Vitamin E to help keep our skin and hair looking youthful and vibrant.

Red peppers are a rich source of phytochemicals and carotenoids, particularly beta-carotene, which load us up with antioxidant and anti-inflammatory benefits.

Peppers are rated for their heat using the Scoville scale, which is a unit of measure that tests for pungency or heat based on the concentration of capsaicin in the pepper. Capsaicin, the chemical in peppers that gives them their heat, has been successfully used in lotions and creams to reduce inflammation and treat pain. 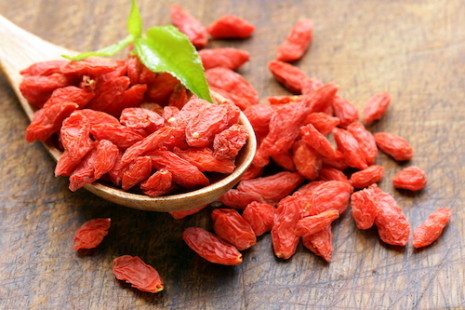 Yes, Gojis are nightshades also! Native to Asia, Goji berries have been used in traditional Chinese medicine for many centuries, yet their nutritional attributes are something of a recent discovery for mainstream westerners.

Because they are so incredibly naturally rich in antioxidants like vitamin C, beta carotene all 8 essential amino acids, important minerals like calcium, they are a wonderful anti-aging food to help create glowing skin, bright eyes and healthy hair.

Goji berries are great for snacking. I love their beautiful, bright color and that yummy pop of sweetness when you bite into them. They are so versatile and portable – I enjoy them sprinkled on salads, or I just grab them by the handful out of the jar I keep of them on my kitchen counter (I like to display them because I think they are so pretty!). As a nostalgic treat, try my Almond-Goji Berry Nuts on a Log!

So Are They Ok to Eat or Not?

The edible members of the nightshade family tend to be very nutritious and are often staples in the food plans of certain cultures, but it is still possible to have a bad reaction to them. If you experience bad reactions like stomach pain, nausea or flushing, consult your doctor and consider getting tested for food allergies. You may also try avoiding nightshade vegetables if you have a history of bone or joint problems, like rheumatoid arthritis.

While we know that vitamin D is essential for healthy bone formation, there has been some animal research suggesting that the vitamin D in nightshades may cause calcium to be deposited in the wrong places in the body, like soft tissue and kidneys, instead of in the bones where it belongs.

My take is to listen to your own body and watch for certain reactions. I personally don’t have any problem digesting them, and I also don’t have RA, and so I enjoy them freely. I encourage you to do the same, and gauge your own body’s reactions as well.

Enjoy the rest of your day Beauty- make it a good one!

With love and gratitude,
Kimberly