The Dangerous Effects of this Toxin You Might Be Consuming Daily Fluoride: you’ve probably seen it labeled in certain toothpastes as an add-on “bonus”, and proponents of fluoride will tell you it is a good thing that is saving us all from tooth decay. But is it? And who is really the source spreading the notion that fluoride is a good thing?

According to the CDC , American communities with a fluoridated water supply have been growing since 1945. In 2010, nearly ¾ of the population of the country had access to fluoridated water.

Fluoride and the Human Body When a city has a fluoridated water supply, that means that your body is absorbing some fluoride whenever you drink water, cook with it, brush your teeth, and even shower. While the amount of fluoride added to water is measured in parts per million, numerous studies have demonstrated that consuming fluoridated water has toxic effects on the human body.

A 1992 study printed in The Journal of the American Medical Association demonstrated an increased risk of hip fracture in elderly women and men consuming fluoridated water. Additional studies have backed up this finding.

Correlation between Fluoridation of Water Supply and Osteosarcoma Osteosarcoma is a form of cancerous bone tumors that occurs in kids. A Harvard University study showed a link between fluoridation of water supply and osteosarcoma among males.

Multiple studies have linked fluoridated water supplies to lowered IQ in children, and there is concern about fluoride’s neurotoxic effects. The EPA classifies fluoride as a chemical with “substantial evidence of developmental neurotoxicity.” 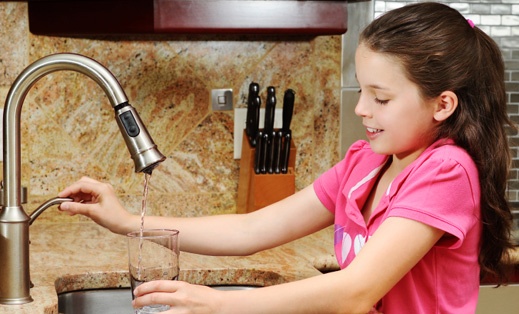 Where Does Fluoride Come from Anyway

While fluoride is a naturally occurring element, the fluoride that is added to municipal water supplies is actually a byproduct of phosphate mining. Before fluoride was co-opted for dental use, it was released into the environment as chemical vapors. These vapors killed plants and livestock near the phosphate mining operations. In order to curtail the death to life in the areas of the phosphate industry, they began putting fluoride through “wet scrubbers” to capture the chemicals, and then selling the fluoride as a cavity preventative.

Part of the Beauty Detox lifestyle is minimizing foreign chemicals and toxins in your body. One of the main objections to the fluoridation of the water supply since it began in the mid-1940s is that by placing fluoride in municipal water supplies, people are being forced to ingest the substance without choice. The FDA has never approved or regulated fluoride as a medication or food additive. Rather, it is regulated under the Safe Drinking Water Act of 1974, which gives the EPA the authority to set drinking water standards. As previously mentioned, the EPA classifies fluoride of having substantial evidence of neurotoxicity.

Because chemicals can build up to toxic levels in your body, I do not recommend consuming fluoridated water.

How can you ensure your family’s safety from fluoridated water?