One thing is more apparent in smaller villages than large cities, and that is the natural rhythms of the traditional culture. While in larger cities life and amenities have been adapted to accommodate tourists, the same cannot be said of the villages.

We’ve been in small villages in northern Italy for over a week now, and we’ve had to acclimate to the local eating habits, time-wise. First of all, it doesn’t seem like the Italians eat super huge breakfasts, though there seems to be a lot of espresso drinking in the mornings, or milky lattes or cappuccinos. An espresso and a pastry seems somewhat standard. Lunch is on the earlier side. I see people starting to eat lunch as early as 11:30, and by noon it seems to be in the primo swing. At some restaurants they have antipasti buffets with olives, some veggies, and a variety of cheese and meat cuts. There is definitely a lot of cheese and meat involved!  There was a project here, and every day at the location the catering even had enormous mounds of full parmesan and mozzarella cheese for everyone to slice off from. When I say enormous (I wish I took a pic), the parmesan mound was as wide as me stretching my arms out in a circle. Then siesta comes from 1-3! The first day I went exploring in Courmeyer, I wondered why all the shops were closed in the early afternoon, and then the siesta was explained to me by one of the locals. I knew about it but I totally forgot. In these small villages that we visited (some consisting of only a few blocks of a town center), the siesta break was pretty ubiquitous. The town would shut down, and everyone would go nap for a few hours. If you had to work, as on the project that we were on (which was American not Italian), and you had to push through the afternoon after eating that heavy meat and cheese-filled lunch, that is when you saw the espresso machine getting major action.  It always had a string of people in line. I asked one Italian guy on our project how many espresso shots he had in the afternoon, and he said he lost count, but perhaps over 8 (!). 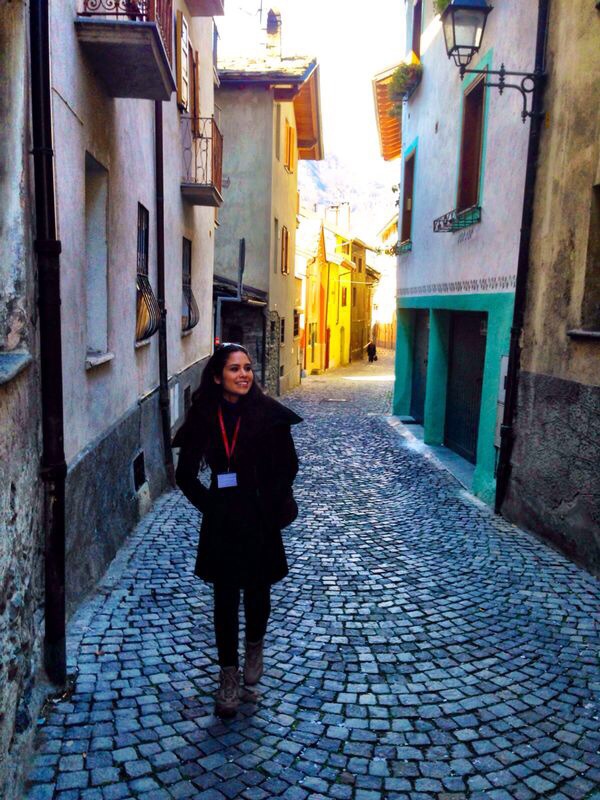 When you eat a super heavy lunch, you cannot help but feel tired, as so much of your energy is going to your digestion. In contrast, I ate big lunches, fiber-wise, but lighter and far easier to digest- huge plates of salad, a few olives, mushrooms, lots of cooked veggies and veggie soups, and I never got tired in the afternoon. And I certainly don’t drink any espresso! Because of the heavy lunch and siesta, everything in the afternoon and evening gets pushed back later, and most restaurants (including in our hotel), do not even open until 7:30 or 8 pm.  So that means by the time you order and get your food it’s at least 8 pm, which doesn’t work for me because I get hungry way before that (even if I have a snack in the afternoon). A lot of people are eating dinner here at 9:30 at night or even later! I discovered this the first time I bounded down to the hotel restaurant, dressed and ready for dinner at 6. I don’t like eating dinner super late.

But no buona! Not open. I started buying a bunch of salad stuff, olives, local mushrooms, etc. at the local markets, and keeping them in my hotel fridge so I could eat earlier, and at dinner I would only order a veggie soup with John and our friends here to be social, but not so much that I felt overloaded going to bed. We’re having a Vitamix at other locations during the journey, but I have missed it here this week, and I have missed my GGS immensely. Looking back, I see I could have traveled with a Nutribullet, but it is only a week and a half or so before getting a full Vitamix, so I decided not to. But maybe I should have!

I love the Italian people and culture, and they are a moderate people that don’t eat gigantic portion sizes. Still, it is very interesting to observe the patterns of consuming heavier digesting foods and siestas/naps and caffeine consumption.  Though smoothies are not a big part of the traditional culture here, I think some of the (open-minded) Italians would love the GGS too, as we do! Don’t you think? I’ll be writing more from the road soon.

Hope you are well and having a wonderful spring so far!