Research continues to provide big surprises about the importance of gut bacteria. We have trillions of microbes living in the gut.  The more we learn, the more clear it is that cultivating beneficial gut bacteria is critically important for all aspects of our health and well-being.

Gut bacteria has been linked to inflammation and many modern diseases and disorders.  The importance of a healthy community of bacteria in the digestive tract is very clear. Beneficial strains of bacteria contribute to strong immune systems, maintaining healthy weight, and even our moods.

The nutritional value of our food is dependent on a healthy community of gut microbiota because if we can’t properly digest our food, we don’t benefit fully from the nutrients. As I’ve always said- We are not what we eat, but rather what we digest. Bad bacteria can cause inflammation and disease. Even autism is now being linked to undesirable gut bacteria. Remember that the foods we eat allow us to introduce various strains of bacteria as well as create an environment that is friendly to helpful bacteria. Plant-based foods will only help your gut flourish!

Researchers Gloria B. Choi of MIT and Jun R. Hun of the University of Massachusetts Medical School have been studying the relationship between gut bacteria and the risk of developing autism in offspring. In two papers published last month, they report that the presence of certain bacteria in the guts of pregnant mice promotes abnormal brain development in their offspring [1].

These affected animals display behaviors that resemble those seen in people with autism spectrum disorders.  The foods we eat allow us to introduce various strains of bacteria as well as create an environment that is friendly to helpful bacteria. If we eat the wrong things, we can also cause bad bacteria to proliferate and work against us.

So, how do we support good bacteria? Good question! There are three main ways to increase desirable gut bacteria to ensure your best overall health: (1) avoid meat, (2) eat a plant-based diet, and (3) consume soil-based probiotics (SBOs).

According to a Harvard University scientists’ report in the journal Nature, a diet full of meat and dairy products alters the gut microbiome significantly and immediately. And in ways that are not good for you. One particular type of bacterium that flourishes in a meat-laden diet is Bilophila, which are bacteria that love bile [2].

We produce more bile when our bodies need to digest animal fats.  This provides the perfect environment for bad bacteria to flourish. The surprising result of this study was how quickly the gut microbiome was altered. Within 2 days, the meat-eating participants’ guts exploded with Bilophila bacteria.

Another study published in the journal Nature found that blooms of Bilophila cause inflammation and colitis in mice. Inflammation is at the root of many illnesses. We do not want to introduce or cultivate bacteria that causes inflammation [3]!

Diet has a dominating role in shaping gut microbiota and changing key populations can transform healthy gut microbiota into a disease-inducing entity. For example, the “Western” diet, which is high in sugar and fat (largely from meat), causes dysbiosis, or an imbalance, in our microbiota.

A healthy collection of microorganisms live in peaceful harmony with their host. An imbalance of gut microorganisms opens the door to proliferation of harmful bacteria, which affects the entire GI tract metabolism and immune response. This was demonstrated in a humanized mouse study where adult human fecal microbiota was transplanted into research mice. The mice were fed a low-fat, plant-rich diet and when switched to a “Western” diet, the microbiota composition shifted to an overgrowth of harmful Firmicutes bacteria. The dietary shift also caused a significant reduction in several beneficial Bacteroides [4].

Mice fed the “Western” diet also had greater adiposity or body fat. Fascinatingly, when a different group of mice were implanted with microbiota from the “Western” diet mice, they developed significantly more obesity than a group implanted with the plant-based microbiota in the first two weeks of the experiment, with no differences in the amount or kind of food they ate.

Consumption of red meat has been found to increase the risk of death from heart disease, even when controlling for levels of fat and cholesterol. Researchers have now laid the blame on bacteria in the human gut that convert a common nutrient found in beef into a compound that may speed up the build-up of plaques in the arteries. Even lean meat causes a change in our microbiome that leads to clogging of the arteries and heart disease [5].

In the same way that fats feed bad bacteria, fiber feeds good bacteria. Fiber does more than just keep us “regular”. Fiber acts as a prebiotic creating a spawning ground for beneficial microbiota.

Vegetarianism alters intestinal microbiota in humans because high amounts of fiber result in increased short chain fatty acid production by microbes, which decrease the intestinal pH. This prevents the growth of potential pathogens such as E. coli and other types of potentially harmful bacteria [6]. 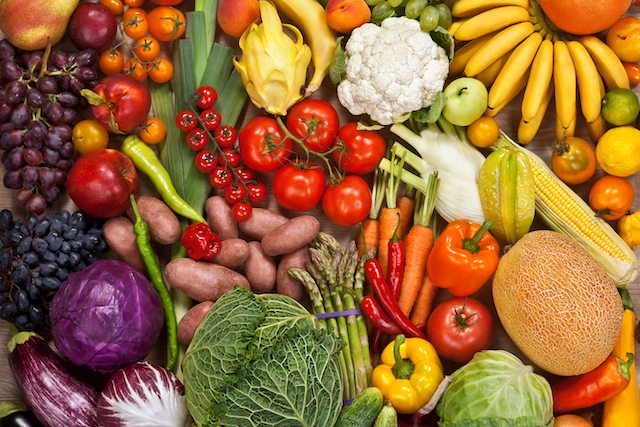 Superfoods like these vibrant colored fruits and veggies are natures best. Be sure they are a priority in your daily intake.

A particularly interesting finding compared the fecal microbiota of European children and that of children from a rural African village of Burkina Faso, where the diet, high in fiber content, is similar to that of early human settlements at the time of the birth of agriculture [10].

In other words, researchers compared the microbiota of children with a typical Western diet to children still eating much like our ancestors did. They found that European children have a microbiota depleted of  beneficial Bacteroidetes and enriched in harmful Enterobacteriaceae compared to rural African children.

Our ancestors had a relationship with the soil and the plants that grow in it. The soil provided numerous strains of the most beneficial bacteria that they ingested when they ate plants and fruits from the ground. Modern conventional farming practices have depleted the soil of the valuable microbes early humans consumed.

Soil based probiotics (SBOs) are “good” bacteria that:

The interaction of multiple strains of soil based bacteria (SBOs) is an essential element in health and wellbeing. Problems arise when we lack the diversity of bacteria.  Other types of probiotic formulas are not as hardy or diverse as soil based probiotics (SBOs).

Regular probiotics, like acidophilus for example, seldom make it all the way through the digestive tract to the lower intestine to become a part of the crucial microbial community. The natural microbiome that kept our ancestors healthy came from soil based organisms (SBOs).

Our environment and our interactions with our environment have changed dramatically since our early ancestors who ate from the forest floor. Our food is grown in depleted soil, sprayed with microbe killing chemicals, and washed clean of the beneficial bacteria they had originally. Soil provides numerous strains of the most beneficial bacteria that are ingested when we eat plants and fruits from the ground.

We spend less time in the outdoors where we are exposed to soil bacteria. We routinely take antibiotics to kill “bad” bacteria, but they also kill “good” bacteria. Our ancestors had many more strains of beneficial bacteria residing in their digestive tracts than we do today.

We have a symbiotic relationship with our gut microbiome. We (the host) provide an environment for bacteria to thrive.  In return, gut-dwelling bacteria keep pathogens (harmful micro-organisms) in check, aid digestion and nutrient absorption, and contribute to immune function. Soil based probiotics (SBOs) are the most beneficial bacteria for our gut microbiome.

We provide the best environment for good bacteria by eating a high fiber plant-based diet. Eating fresh fruits and vegetables, grains and legumes provides the nutrients we need to be healthy. They also provide the foundation for good gut bacteria to flourish. Adding soil based probiotics (SBOs) will help replenish the beneficial bacteria that kept our ancestors healthy but are lacking in our modern lifestyles.

I hope you found this helpful and informative! Take great care of yourself and your gut, so you can live your best life!

[1] Mother’s gut microbes could be linked to autismlike disorders in children
[2] Diet rapidly and reproducibly alters the human gut microbiome
[3] Dietary-fat-induced taurocholic acid promotes pathobiont expansion and colitis in Il10−/− mice
[4] The Effect of Diet on the Human Gut Microbiome: A Metagenomic Analysis in Humanized Gnotobiotic Mice
[5] Red Meat May Clog Arteries Because of Gut Bacteria
[6] Diet-Induced Dysbiosis of the Intestinal Microbiota and the Effects on Immunity and Disease
[7] High-throughput clone library analysis of the mucosa-associated microbiota reveals dysbiosis and differences between inflamed and non-inflamed regions of the intestine in inflammatory bowel disease
[8] Interplay between weight loss and gut microbiota composition in overweight adolescents.
[9] Carbohydrate metabolism in Bifidobacteria
[10] Impact of diet in shaping gut microbiota revealed by a comparative study in children from Europe and rural Africa

Lil Bub and I playing around! xo