The Science Behind Eating Dirt! Our ancient ancestors got a lot of things right: For example, the majority of them were vegetarians, relying on fruits, nuts, and vegetables for nutrients as opposed to meat and dairy (which even if eaten, did not make up the majority of the diet).

Since it wasn’t unusual to pluck a vegetable straight from the earth (and eat it without washing), they were also unknowingly benefiting from natural probiotics found in the soil—probiotics that can play a key role in maintaining a healthy gut. As our food system becomes increasingly sterile (think hyper-processed baby carrots as opposed to a freshly picked carrot from the garden), we are no longer reaping the rewards of these soil-based organisms (SBOs).

So, what exactly can SBOs do for you, and how can you incorporate them into your diet? (Don’t worry, you don’t have to eat a handful of dirt!!). Fret not, Beauties—in this guide I’ve answered all your burning questions. Read on to find out the science-backed reasons why these organisms can play a positive role in your health, and how to get more of them.

SBO stands for soil born organisms. As the name suggests, these tiny bacterial microorganisms live in the soil. Unfortunately, the use of fertilizers, pesticides, fungicides and herbicides (among other modern farming practices), have stripped away these microbes.

On top of that, it’s now common for produce to be either sprayed with agents that kill off these microbes or scrubbed clean of them. Meanwhile, our gut microbiome consists of millions of different kinds of bacteria. 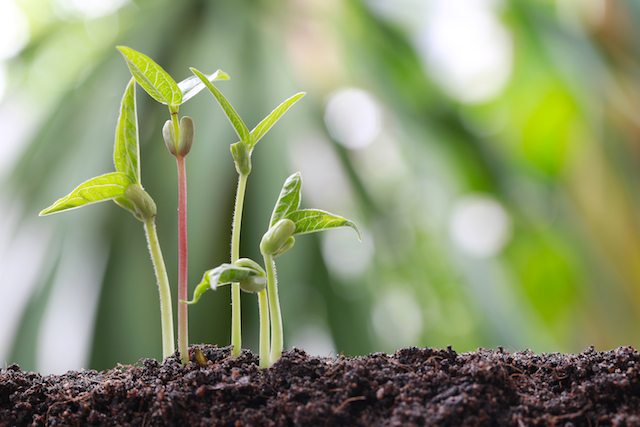 It’s a mutually beneficial coexistence. Not only are these microorganisms vital to a healthy gut microbiome, they can also support other aspects of your physical and mental health. It makes sense given the fact that while our bodies are mostly made up of water, the rest is essentially dirt. In fact, there are over 60 elements in our bodies in total—the very same elements found in the Earth’s crust.

How are SBOs different than other probiotics?

Here’s a mind-blowing fact for you: SBOs don’t truly reach their full potential until they travel to your lower intestine. That’s because they are surrounded by protective shells, but in the warm, moist conditions of your digestive tract, they come to life—not unlike a seed that grows with warm light and water! What’s more, these bacteria become increasingly beneficial over time, long after they are ingested [1].

Now, this is precisely what separates SBOs from other probiotics. Yogurt and other cultured foods are especially sensitive to air, acid, temperature and other environmental conditions, and because of that, they either die or simply pass right through your intestinal tract.

For this reason, they are referred to as “transient”—because they don’t take up residence in your body, and while they can provide some temporary benefits, they don’t offer long-term health benefits. Conversely, SBOs are resident-forming probiotic strains, because they are hardy enough to make it all the way down to the lower intestine, and they remain in the digestive tract to provide a slew of amazing benefits. So it makes sense that a 2013 report in The Atlantic titled “Healthy Soil Microbes, Healthy People,” noted that many scientists think health care will steadily begin focusing “less on traditional illnesses and more on treating disorders of the human microbiome” with targeted microbial species (probiotics), and therapeutic foods for gut health.

The authors even went so far as to state that the drugs of the future “will be full of friendly germs and the food they like to eat.” In other words, in making SBOs a priority in your diet, you can think of yourself as being a little ahead of the allopathic medicine curve!

Unfortunately, over time we have been increasingly destroying vital organisms in the human gut via processed foods and the excessive ingestion of antibiotics. As noted in The New York Times Magazine, some researchers believe that “the alarming increase in autoimmune diseases in the West may owe to a disruption in the ancient relationship between our bodies and their ‘old friends’—the microbial symbionts with whom we co-evolved.”

What can SBOs do for me?

Ok, by now you probably can tell that these organisms are powerful and that they play a key role in your health. But now you’re wondering: “what benefits will I actually get from them”?

The short answer: A lot. In fact, there are more than 800 research studies that reference soil-based organisms, linking them to the treatment and prevention of a wide range of conditions, including but not limited to allergies, nausea, indigestion, and bacterial/fungal infections. I’ll let the science speak for itself…[2].

One report published in Positive Health News found that SBOs also help prevent or improve autoimmune conditions by correctly identifying invaders and automatically triggering antibodies to fight them off. Basically, these organisms are microscopic superheroes [3]!

Candida, parasites and fungi can all be killed off with the help of SBOs, which bind to toxins and make it easier for your body to flush them out. The report for that same study noted that a jaw-dropping 99 percent of patients who consumed SBOs for a variety of ailments—including foot sores from diabetes, Chronic Fatigue Syndrome and insomnia—cited relief and other successful outcomes.

Additionally, HIV-infected patients saw improvements in energy as well as certain chronic conditions thanks to SBOs. Dr. Peter Rothschild, a researcher the State Academy of Medicine (Mexico), has suggested that SBOs stimulate the body’s own production of 16 different subspecies of alpha-interferons, which are proteins that can help protect cells against various viruses, among other immune regulating effects.

SBOs also help your body to produce important vitamins and antioxidants. In fact, the body simply can’t make all the vitamins it needs without adequate beneficial bacteria. The fat-soluble Vitamin K2 (or menaquinone), which aids in preventing hemorrhaging and other internal bleeding, can actually only be produced in the intestinal tract if intestinal flora is present [4].

Given that they play such a major role in gut health, it’s not surprising that SBOs can also reduce uncomfortable symptoms like gas and bloating. On top of that, they can normalize your bowel movements (thus reducing constipation), by helping to balance the PH level in your colon and increasing the presence of helpful bacteria.

One 2009 study found that the soil-based probiotic Bacillus subtilis can be extremely effective in reducing symptoms for those with IBS. Moreover, Dr. Rothschild has asserted that without SBOs to help facilitate digestion, our bowels can essentially become toxic waste dumps, and the intestinal wall eventually can no longer properly absorb nutrients as a result [5].

Now that you’re well-versed in the perks soil-based probiotics have to offer, I wanted to share that this formula I offer you take all this into consideration and is designed with resident-forming strains for maximum positive health effects.