A common comment I hear from people working in offices is how often their co-workers come up with a reason to have cake. I’ve heard people complain that sometimes there are several cake celebrations per month. I know- it’s an awesome distraction from work. Cake in the conference room! Yep…again! But what about how it is affecting your body and health?

Everyone wants to celebrate on his or her birthday, but to me, birthdays are a celebration of life. Birthday cake (or any kind of celebratory cake) — especially the commercially prepared kind — is loaded with unhealthy ingredients that could reduce the number of birthdays you have left to enjoy if you partake of it too often. You can always start a new tradition with baking a healthier kind of cake or treat to celebrate with, as I always do for my clients’ birthdays. Try my Raw Ginger-Chocolate Cake, for example. 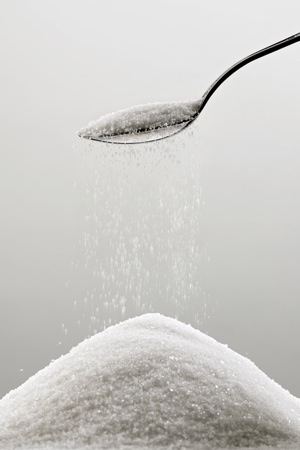 When you eat sugar, your body responds with an immediate and massive rise in blood glucose. In order to quickly get blood sugar in check, your body releases insulin into your bloodstream. Insulin plays many key roles in your body, but it also serves as a fat storage hormone. When insulin is released, it moves the glucose into fat cells for storage. This is bad news if weight loss (or not gaining weight) is your goal, but it’s far from the only problem with sugar.

A 2012 UC Davis study showed that sugar (including high-fructose corn syrup, table sugar, and other forms of sugar) increased risk factors for heart disease, hypertension, type 2 diabetes, and poor blood lipid profiles. This occurs because the liver can’t deal with excessive amounts of sugar, and instead leaks it out into the bloodstream. There, it forms small, dense LDL, the type of cholesterol that sticks to artery walls. With fruit, there is fiber, so you don’t eat the massive amounts that hit your body from processed treats.

The same study links sugar to cancer, as well. This link exists because certain malignant tumors contain more insulin receptors than normal cells. These receptor cells signal the tumors to consume glucose to support the growth of the tumor. Most cakes contain white or wheat flour (unless you’ve specifically ordered a gluten-free cake). The problem with flour in cake is gluten, a sticky protein that naturally occurs in wheat, rye, barley, and oats. Wheat flour, aside from appearing in a number of the processed foods humans eat, is also used to make glue. When the sticky stuff gets into our digestive systems, our bodies have a terrible time trying to digest it. In fact, a significant portion of the population is either allergic to wheat (it is one of the most highly allergenic foods) or sensitive to gluten. This can cause problems, ranging from mild allergic reactions to a total inability to absorb nutrients in the intestines, as found in celiac disease. For most of the population, wheat is best avoided. Many cakes contain dairy products such as butter and milk. Like wheat, dairy is one of the most common food allergies exhibited by human beings. Dairy products also leave a significant acidic residue in the body, which, according to The China Study, can rob the bones of the minerals such as calcium and weaken the bones and body.

Likewise, dairy contains the protein casein, which is poorly tolerated by the human body, and the sugar lactose, which causes digestive problems in a significant portion of the human population. There are many other problems with dairy, as well, including all of the hormones used in dairy production. I recommend avoiding dairy at all costs. If you’re eating a commercially prepared cake or it has been prepared from a cake mix, chances are it has some genetically modified ingredients. Common sources of GMOs include soy (soybean oil, soy flour, soy lecithin, etc.) and corn. Genetic modification of food crops (read our blog about GMOs and studies related to their health effects here is a relatively recent development in human history – it started in the mid-1990s. Since that time, a few studies have showed multiple health dangers associated with GMOs, and further study is needed to truly discover the long-term effects on human health. With such a short time in the human diet, eating GMOs amounts to a huge health experiment on the human population. With all of the brightly colored frosting, birthday cake is often a work of art. What isn’t art, however, is putting the dyes that color the frosting into the body. While food coloring has long been an additive in the foods we eat, that doesn’t mean it’s healthy. In fact, in 2011, the FDA released a report suggesting a possible link between food coloring and ADHD in kids.

According to the Center for Science in the Public Interest, most artificial colorings come from synthetic chemicals. These chemicals contribute to our toxic load and should be avoided altogether. With so much about birthday cake that’s unhealthy, it’s best if you give it a pass the next time someone comes around the office with a celebratory cake. Again, try contributing a Raw Ginger-Chocolate Cake, or pursue another healthier option, instead, such as fresh fruit, a delicious Chia Pudding. To make a chia pudding soak a few tablespoons of chia seeds in unsweetened almond milk for 10 minutes and add a little vanilla and some stevia to taste. It’s a sweet treat you can indulge in that won’t harm your health.

If your co-workers or family think you’re being weird and “not fun”, then just explain that you feel better not eating cake. If you are making a healthier treat for them, explain that you want to celebrate life and a healthy quality of life for their birthday, and are thinking of them with love. No one can argue against love, right? 🙂