New Study Shows Lead Found In Over 55% of Lipsticks

I often talk about how lots of  beauty products contain ingredients that may be very harmful to your health. You can work hard to increase your beauty, but it shouldn’t hurt you! Still, I was disturbed to read this report showing that lab tests of popular lipsticks contained lead 55 percent of the time!  It’s particularly gross to me, considering how obviously, all of us women inevitably end up eating at least a portion of our lipstick every time we put it on.

How can this happen? According to the Campaign for Safe Cosmetics, the FDA doesn’t regulate the amount of lead or other unsafe ingredients cosmetic can contain. Instead, the government relies largely on the industry to regulate itself. Unfortunately, the result is that more than half of the brands recently tested contained the dangerous ingredient.

This isn’t even the first time this year that lipstick has come under fire for containing lead. In February, an FDA analysis showed that 400 shades of lipstick contained at least trace amounts of lead, including those made by cosmetic industry giants such as L’Oreal, NARS, Cover Girl and Maybelline. Busted! A 2009 FDA study showed some lipsticks contained as high as 3.09 ppm of lead. No level of lead is considered safe for human consumption.

Lead Poisoning and Other Problems

Lead in lipstick is especially concerning given how likely women are to ingest at least a little bit of their lipstick every time they refresh it. There is no safe level for lead in the human body. For example, a 2006 study showed that people with as little as 2 mcg/dL of lead in their blood were more likely to die of a heart attack or stroke. Other health issues associated with lead in the human body include:

Scary stuff! There is no good in getting shiny red lips at the sacrifice of these enormous potential health issues.

That being said…you can still get those shiny red lips with better, safe options with organic makeupbrands! And not at the expense of looking great. These are my favorite natural lipsticks, which work wonderfully and have great color choices: 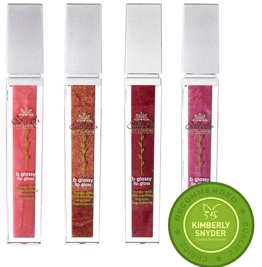 I love the Siren lipsticks by Vapour Beauty. I own like 5 colors, and keep them in my bathroom and purse both. Sometimes I wear them with gloss on top, and sometimes I don’t. They are luscious and long-lasting.