We are slowly headed into fall and with the change of seasons it’s a great time to give your immunity a boost! The temperatures are shifting and increased flurry of activity (and stress!) means you need extra strength to fortify your system and keep bugs at bay, and that is why I created today’s smoothie. My Creamy Cinnamon Smoothie Recipe is a great way to fill up our body’s with a natural dose of healing power—fighting off infections and keeping you beautiful from the inside out!

Cinnamon is full of antioxidants which protect the body from oxidative damage caused by free radicals. Compared to antioxidant activity of 26 other spices, cinnamon outranked super foods, like garlic and oregano, [1].

Cinnamon is so powerful that it can be used as a natural food preservative [2].

Something else that’s quite interesting is how cinnamon helps with inflammation in the body, which is incredibly important, since it helps the body fight infections and repair tissue damage.

It’s important to note that inflammation can become a problem when it turns into a long-term, chronic issue and is directed against the body’s own tissues. This is when cinnamon may come in handy because the antioxidants in it have potent anti-inflammatory activity [3].

Give your body the boost it needs in improving and maintaining digestive health. Click here!

Watch what you put into your body

As you can probably tell, I love to learn everything I can about the foods I use in my recipes and share with you! What we put in our bodies becomes part of us- it integrates with us.

When you think of it that way, you only want to put food that have a beautiful effect on our well-being, right?! (Of course we might forget that concept when our favorite cookies or cupcakes or French fries are around 🙂 , and that is okay because no one has to be perfect!).

When I traveled to Sri Lanka, you bet I reached out to one of the locals there, and asked them all about the amazing cinnamon trees. You can watch that here!

Warming herbs and spices heat up the body, boost circulation and speed up metabolism. All of these actions have a positive effect on the immune system, and adding them to your diet can help fight colds and flu, as we head into the cooler seasons.

Cinnamon really is one of the most delicious and healthiest spices that Mother Nature has given us. It’s time to get those blenders out and take full advantage of this amazing spice—mixing it with one of my other fav’s—coconut. This recipe couldn’t get an simpler! 😉 Pour the almond milk into the blender. 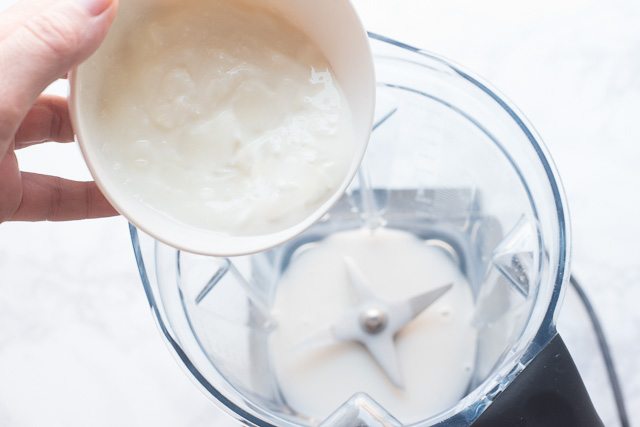 Add the coconut or almond yogurt. Sprinkle in a pinch of nutmeg. Let me know what you think of this recipe and don’t forget to add this to your Pinterest Smoothie board!