The Mediterranean Diet: The Good, the Bad, and the Ugly 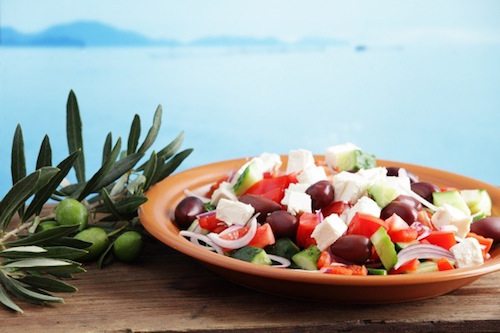 Maybe you’ve heard in the media how the Mediterranean Diet has been praised as a healthful diet. Indeed, in Greece, Southern Italy, and Crete, traditional ways of eating have led to vigorous good health, heart health, and decreased rates of cancer.

I want to emphasize however, the word traditional, because of late, many people in that part of the world (especially cities in Greece), have succumb to a Western diet and thus obesity rates are soaring there as well.

Today though, let’s focus on the traditional, cultural  foods surrounding that part of the world.

History of the Diet

Ancel Keys first wrote about the Mediterranean diet in 1945 when he was stationed in Salerno, Italy. At the time, Dr. Keys noticed how healthy the population was, and correlated it to the diet that people in the region consumed.

Keys is best known for his work in studying the health effects of different types of fats. Although Keys published work on the Mediterranean diet in the 1940s, it took nearly 50 years for it to reach public consciousness.

To further his hypothesis about the health effects of the diet consumed in the region, Dr. Keys began the Seven Countries Study in 1958. In the study, Dr. Keys and colleagues in other countries tested the hypothesis that regional diet was related to rates of heart attack and stroke.

Over the next 12 years, researchers surveyed men between the ages of 40 and 59, comparing dietary factors to diseases in populations in each region.

Ultimately, the study showed that populations in areas eating a diet low in animal products and cholesterol-rich saturated fat enjoyed longer life expectancy and lower levels of serum cholesterol in the blood.

The group with the longest life expectancy hailed from the Cretan Mediterranean.

What Is the Mediterranean Diet?

The Mediterranean diet follows the cultural diet practices of the Cretan Mediterranean population during the time Dr. Keyes performed the Seven Countries Study (1958 to 1970). The diet has several health benefits including:

So why does the Mediterranean diet work? If you look at it closely, you may notice it has many qualities similar to The Beauty Detox Solution.

Let’s break down the elements to see why the Mediterranean diet is so effective.

1 – It’s high in plant foods. In fact, much like The Beauty Detox Solution, the Mediterranean diet is made up mostly of vegetables, fruits, grains, nuts, and seeds.

These foods for energy have enzymes to aid digestion and beneficial nutrients that contribute to your body’s overall vibrancy. It is also a high alkaline diet, which preserves cell health.

Unsaturated fats, on the other hand contribute to better health, promoting weight loss, reducing cholesterol, and decreasing the risk of breast cancer.

3 – It minimizes animal protein and dairy. Both of these foods create a state of metabolic acidity in your body.

Since your body needs to maintain an alkaline pH to function properly, when you eat metabolically acidic foods like animal protein and dairy, your body pulls alkaline mineral salts from your bones and cells to neutralize the acids and return to alkalinity.

This hampers function. Likewise, dairy contains a protein, casein, and a sugar, lactose, that the human body does not process well.

This can create increase toxicity within the body. Further, animal proteins and dairy are one of the highest sources of toxins for humans to ingest, including antibiotics, hormones, and pesticides.

4 – The diet emphasizes local, seasonal, organic produce. Since it is based on how Cretan Mediterranean men ate in the 1960s, it is safe to assume that the Seven Year Study occurred mostly before the massive industrialization of the food supply. This means that the diet most likely contained fewer toxins like pesticides. 5 – The diet is high in antioxidants. Red wine contains resveratrol, which protects cellular and heart health.

6 – It is minimally processed. Part of the reason today’s Western diet is so unhealthy is due to the highly processed foods commonly consumed. These foods contain toxic chemicals, pesticides, artificial flavors, food dyes, sugar, and neurotoxins like MSG.

Eating a minimally processed diet like the Mediterranean diet protects you against the many diseases associated with processed foods.

7 – It contains an exercise component. Men in the Mediterranean region involved in the Seven Countries Study were highly active. Activity can help detoxify your body, and it helps you maintain high levels of energy while controlling weight.

8 – It is low in sugar. Sugar consumption causes spikes in blood glucose, which result in the release of insulin. Excessive sugar consumption in the Western diet causes overuse of the pancreas, which may result in insulin overproduction.

It may also stop producing it altogether as the production mechanism wears out.

Sugar also feeds Candida albicans, the yeast found in the human body. Proliferation of Candida albicans can cause a whole host of health problems, including weight gain and difficulty losing weight.

10 – It balances Omega-3 and Omega-6 fats. The typical Western diet is high in Omega-6 fats, creating an imbalance between these two essential fatty acids.

Your body needs both Omega-3 and Omega-6 fats in roughly equal amounts (some experts believe a 1:3 or 1:4 ratio).

Unfortunately, the highly processed nature of today’s American diet has upset the balance between these two essential fatty acids. The result is inflammation, higher risk of heart disease, and autoimmune dysfunction.

While there are similarities between the Mediterranean diet and The Beauty Detox Solution, there are differences as well.

1 – Changing your diet will make a significant difference, but it’s not the only solution. I also believe you need to pursue ongoing cleansing in order to rid your body of all of the toxins that have built up throughout your life.

2 – I used to recommend fish to those that want to keep some animal protein in their diet, but now I caution people eating it. Today, fish is one of the most toxic foods, containing high levels of mercury and other contaminants.

If you eat fish, do so minimally in order to avoid mercury toxicity. Instead, get Omega-3s from plant sources like chia and flaxseeds. DHA, which is a type of Omega-3 fat, can be supplemented from an algae-based source. There is no reason to consume fish oil, which is often rancid. 3 – I recommend eating a majority of your vegetables raw for the most nutrients and enzymes.

4 – The Mediterranean diet allows small amounts of low-fat dairy. I don’t recommend any dairy because it contains high levels of hormones and antibiotics. I also feel the human body cannot adequately process the proteins and sugars in dairy.

5 – I also recommend taking probiotics for a healthy gut.

6 – Coconut oil, while saturated, is a healthy fat that supports thyroid function and contains lauric acid, a medium chain fatty acid that has all kinds of health supporting properties. Coconut oil is also 100% cholesterol-free, unlike saturated animal fats.