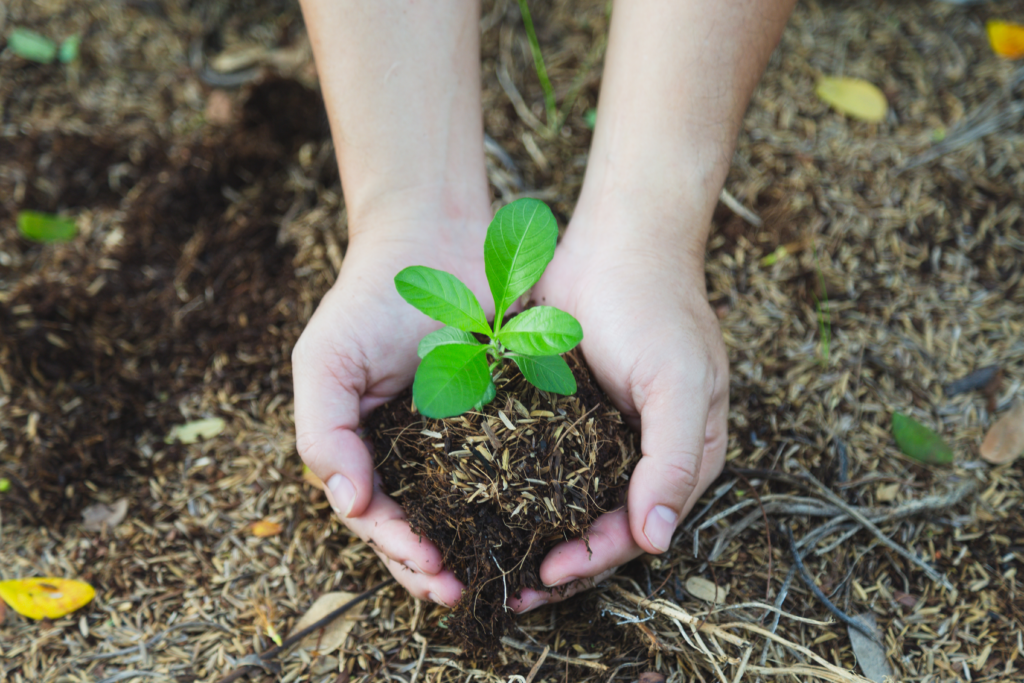 Do you take a probiotic supplement, or have you taken one? If yes, is it soil-based, or a traditional probiotic (most often including dairy strains)?

Taking probiotic supplements has become increasingly popular in recent years. With new research getting published daily about the importance of our microbiome and how much our flora affects our mood, brain and health it’s not surprising!

Probiotics are a key part of maintaining a healthy gut, healthy digestion, and absorbing all the nutrients from your food.

There are a lot of different probiotics out there— the sheer number of options can feel overwhelming. However, if you’ve been part of the community for a while, then you know that I’ve been talking about the important and unique benefits and advantages of a soil-based probiotic supplement.

Soil-based probiotics are also often referred to as SBOs or soil-based organisms. I’ll use the term interchangeably often.

Note, when I refer to traditional probiotics I’m talking about “regular probiotics” or bacteria without a protective endospore.

Simply put, yes! I believe probiotic supplements made with soil-based organisms are better than the more traditional probiotics, and is one of the best ways to help support good microflora balance.

As a whole, a healthy balance of gut flora can help keep you regular, as well as help you look and feel younger and more vibrant. But soil-based probiotics have one major advantage over traditional probiotics.

The fact is, they can’t. And if they can’t survive in your gut, then your body can’t reap any of their potential benefits.

Remember, Beauty— your stomach and small bowel are highly acidic areas. This is how they’re able to break down your food, absorb nutrients, and kill the bad bacteria that aren’t supposed to be there.

On the other hand, SBOs have a tough outer shell that helps them survive in your gut for longer. This helps them have a better chance of getting where they need to go— to your gut! Then once they get there, it’s much easier for them to share their amazing health benefits.

The longer SBOs take up residence deep in your intestinal tract, the more they can aid in and protect the growth of friendly bacteria. They also eat bad bacteria and prevent them from making you sick. This is why they’re called “resident forming” bacteria.

Taking Up Residence in Your Gut

While residing in us, their role is still what I’ve described— They consume and digest unfriendly bacteria, producing a safe, healthy environment. They also create food for the friendly flora in our intestinal tract.

What Are Soil-Based Organisms?

Soil-based organisms (SBOs) is the term that describes beneficial bacteria that have their origins in healthy, natural soil.

Some different types of soil-based organisms include:

While not all soil-based bacteria are good bacteria, most of these organisms, such as B. coagulans and B. subtilis, can help promote a healthy gut microbiome and boost your overall health. They are vital for digestion, waste elimination, absorption of nutrients, supporting your immune system, and so much more.

SBOs and Our Ancestors

Ancient humans would nourish their bodies by foraging and eating the many foods growing around them. This often included a healthy layer of earth on top. Ever seen children instinctively eat dirt? Doesn’t seem quite so ridiculous now, does it? :)

We as humans have evolved and adapted in symbiosis with the soil. Not only have we relied on it for our own food, but we also rely on it to supply the natural world with plants that feed everything else.

However, nowadays we simply don’t get all those beneficial bacteria from the soil. And as a result, our gut microbiomes are less diverse than our ancestors who lived in harmony with the earth.

Bottom line— our connection, interaction and consumption of food from the soil means that soil-based microorganisms are part of us. Indeed, they always have been, since the dawn of time. And our ancestors knew that.

What Kinds of Bacteria are in Traditional Probiotics?

Traditional probiotics mainly consist of lactic acid bacteria, such as Lactobacillus, Bifidobacteria, and Lactococcus. These bacteria are usually found in decomposing plants, soil, and milk-based products. True to their name, these bacteria produce lactic acid as a product of fermentation. [1]

And while lactic acid bacteria is often found in plant-based sources, many popular probiotic supplements still use bacteria from milk sources. Of course, this isn’t something you want if you’re living a plant-based or dairy-free lifestyle.

When It Comes to Bacteria, Balance is Key

When the soil has the nutrients it needs— along with the right balance of good and bad bacteria— it’s able to grow the healthiest, most robust plants that are strong, resistant to disease and full of vitality.

However, when there’s an imbalance— often due to the presence of too many unfriendly bacteria such as yeasts, molds, and other pathogens— the plants are weak, and tend to rot and decay.

Here’s what a healthy plant looks like, compared to one that’s been overrun by mold: 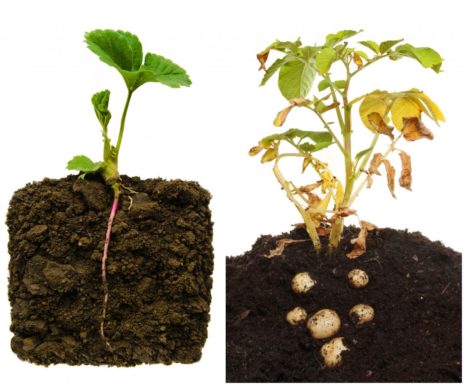 Now, seeing this, it makes sense that nature has created certain microorganisms whose role it is to keep those unfriendly bacteria at bay. Without them, all life would disappear.

So Where Do SBOs Figure Into This?

Soil-based organisms are nature’s first line of defense against illness. They help keep pathogenic, unfriendly bacteria in check while also paving the way for friendly bacteria to grow and thrive.

How do they do this? The first way is that good bacteria actually consume bad bacteria. This is one of the primary roles of good bacteria. They literally eat up mold, yeast and other forms of harmful bacteria that would otherwise overrun the soil and plants, leading to imbalance or premature death.

How Many Bacteria Are In Your Body?

It’s estimated that there are over 1000 different strains of bacteria— over 100 trillion individual bacteria— in the human body alone. For reference, that’s more than all money— of all currencies, banks and from all other sources— in the entire world! And that 100 trillion number refers just to the “good” microorganisms inside us. There are also many unfriendly forms that are even more difficult to count. [2]

Now, if there are that many invisible life forms in our bodies, just imagine how many exist in nature. It’s a number too large to measure or count. Similarly, the natural world has healthy, friendly bacteria— along with unfriendly forms— that the good bacteria must keep at bay in order to remain balanced and healthy.

You’ve all heard the saying “out of sight, out of mind.” If you don’t see something, you typically don’t think about it.

Unfortunately, this is often the case with all these beneficial microorganisms. We tend not to think of them because they are so tiny that they are nearly invisible. But these life forms are as important as oxygen, water or food, and absolutely necessary for our survival.

Soil-based probiotic bacteria are essential for our health— but now, modern life is taking us further and further away from optimum levels. We may not be consuming our produce fresh from the garden like our ancestors once did, but it’s possible to nurture more diverse gut flora without eating dirt.

The right probiotic supplements can help you restore your health to optimum levels by supporting these trillions of tiny powerhouses in your body. The other way is to eat foods that are naturally rich in probiotics.

"I love these SBO probiotics! I've tried so many different kinds and these are truly the best! They keep my gut healthy and happy." I love cultured vegetables and highly recommend them for a healthy diet. I’ve been eating them for years!

And while probiotic foods are rich in good bacteria that can aid your digestion, they can’t replace a good SBO supplement.

Without the presence of soil-based microorganisms, we have far less protection against the pathogens floating around as well as less defense against the inner bacterial imbalances.

Bacterial imbalances in your gut result from consuming— or having consumed— processed foods, additives, antibiotics, and other substances. All of these kill friendly bacteria indiscriminately. Unfortunately, this is something that happens all too often in the modern world we live in.

But you can fix that!

Improve Your Wellness with SBO Probiotics

Solluna developed a soil-based probiotic supplement because we understand just how beneficial these microorganisms are for your gut health. This unique formula contains soil-based organisms (SBOs) to improve your ability to digest food, mimicking what we find in nature for a natural, healthier digestive process. And as an added bonus, you don’t have to refrigerate it!

These hardy strains of soil-based organisms can not only survive in your gut, but they interact with the strains already present in your gut, creating a strong bond to keep you feeling strong and beautiful.

Our Feel Good SBO Probiotics formula is also really special because of the ratios of the SBOs. We only took the clinically researched most effective sbos and we put them together in a formula that’s really synergistic with the strains themselves and with our bodies.

We also added in prebiotics, made up of very powerful turkey tail and chaga mushrooms, which act as food for the probiotics.

We also added mineral-rich shilajit, which acts as a postbiotic. Shilajit is an ancient compound that’s been used in Ayurvedic medicine for thousands of years. And it is very powerful in boosting our immunity as well as helping to support the colonization of the bacteria. So when you take this every day, you are getting a powerhouse of benefits. For smarter gut health, I recommend taking not only my SBO probiotics, but also my Feel Good Digestive Enzymes, and my Feel Good Detoxy supplements. These three supplements work in harmony with each other to help your body digest food easier, absorb nutrients more efficiently, and give you the energy you need to fuel your perfectly imperfect life. :)

Soil-based organisms may be tiny, but that doesn’t mean that you should ignore them and their health benefits! There are a lot of probiotics out there, but I hope I’ve convinced you to give SBO probiotics a try if you’re looking for the right probiotic for your unique health needs.