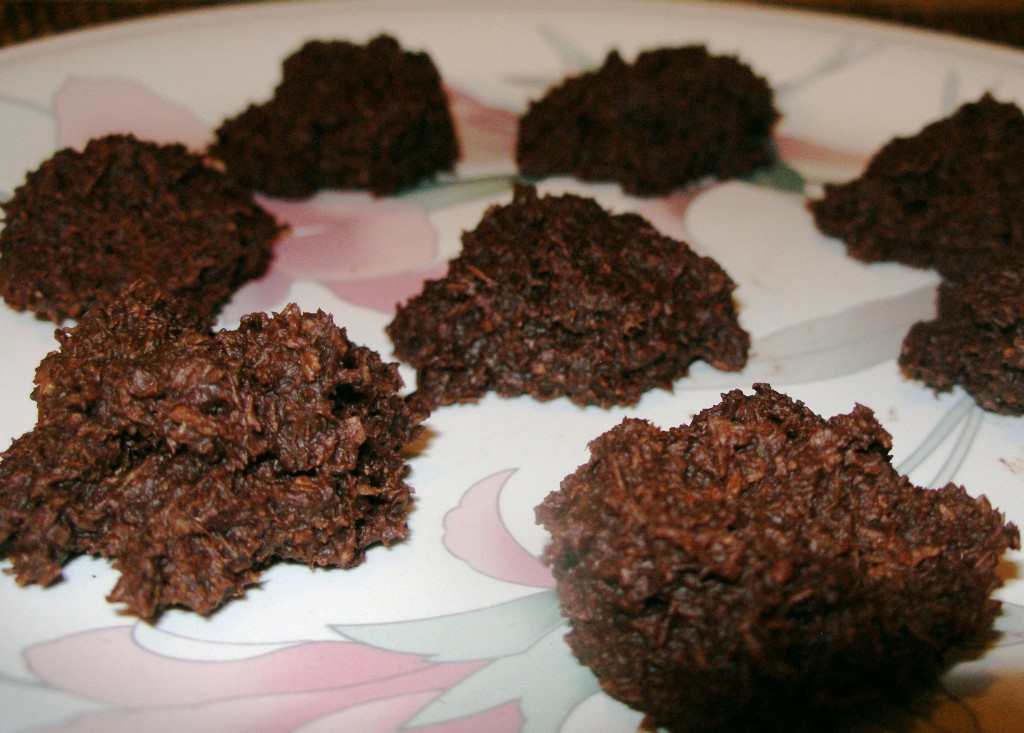 Okay warning: These macaroons are so ridiculously yummy that you are going to fall passionately in love with them… And want to SCARF all of them them up immediately, until your fingers and teeth are covered in a chocolately coating of raw heaven. 🙂  They are a good brownie replacement, with a gooey center. And because they are nut-free, they are great for those of you that may have any nut allergies. If I do say so myself, they are Ridiculous!!! Remember to eat in moderation- cacao should not be an everyday food!

This recipe is a great way to get coconut oil in the body- an amazing ingredient from which we could all benefit from having more. Coconut oil supports thyroid function and contains lauric acid, which is the good fat that the body burns off rather than stores, and actually helps us burn off the stored fat. Oh yes my friends— is is true!!!!!!!!! Yay!

Coconut oil is just so beautifying. It is high in antioxidants and vitamin E and protects us from free radical damage. There is a good amount of coconut in The Brightening Cleanser (we are fixing the packaging issue by the way, it is coming!), for these very reasons and also because it is a potent and natural anti-microbial, so will help keep the skin pure and blemish-free, as should all organic makeup brands!

Raw cacao is something that again, must be eaten in moderation. While it does have some good minerals, like magnesium, there are other sources of these minerals. Cacao should not be considered a “superfood,” as the real superfoods are from greens, which are actually balancing. Cacao on the other hand, is unbalancing. It contains caffeine, and has some toxic qualities, including a compound called theobromine.

Well, have an awesome and blissful weekend!!! Try to take some time for yourself, a few minutes to just be still and ground down and breath, to recenter yourself after all your week’s worth of activities and running around.