Misconceptions of Portion Control that Leads to Weight Gain It’s no secret we Americans have a big problem with weight. Now I did just do a post on the ridiculousness of some Olympians bodies being seen as “bulky.” But there is a world of difference between being fit and muscular and being truly fat/obese. The obesity crisis is mounting, affecting many other areas of our society- including creating health and financial issues.

It’s downright scary just how quickly our population has gained weight – expanding from an obesity prevalence of less than 20 percent in the mid 1980s to over 35 percent today. Experts have spent a great deal of time studying the problem, and have come up with a number of factors that have contributed to this rapid rise in body fat among the Western populace.

We’ve discussed many of the contributing factors, including the ubiquity of sugar and high-fructose corn syrup in processed foods, the fact that processed and fast foods make up such a significant portion of the Western diet, and the decrease in activity. One thing we haven’t discussed much, however, is portion sizes and how much they’ve grown over the past few decades. Most people are just eating way too much food- which is exhausting to the entire digestive system, and is simply way too much matter to give the body to deal with.

While calories aren’t the be-all and end-all in weight loss/weight gain, they do matter. Calories aren’t quite as simple as most diets tell you they are, however. A calorie (technically a kilocalorie, but it’s been shortened to calorie) is merely a measure of heat energy. As a thermodynamic measure, calories measures tell you how much energy some type of fuel provides a machine. In the case of food calories, we are equating foods for energy and our bodies with machines. It’s an overly simplistic view of the human body, and the emphasis on calories has misled a population desperate to lose weight into believing that calorie counts of foods are the single most important aspect of the foods when you’re trying to control your weight.

Why is that overly simplistic? Because if you have 200 calories of Snickers bar sitting in front of you, it’s going to provide your body with very different things than 200 calories of dark, leafy greens. Your body is not a simple mechanical machine. Instead, it is a complex biological mechanism that will respond to and utilize the Snickers calories quite differently than the leafy green calories. Each food will cause the release of different hormones and the secretion of different chemicals. Each will provide the body with a different set of nutrients and bring about a different level of satiation. Still, your body only requires a set amount of energy to function optimally. When you provide your body with more fuel than it needs, it must do something with the excess. Because the human body is a miraculous machine built for survival in even the most difficult circumstances, what typically happens to the excess fuel is that it is stored as body fat to be used in leaner, more desperate times. This is why over-fueling matters. When you provide your body with excess fuel, you must either engage in extra activity to burn it off, or your body will store it as fat.

The Problem with Portion Sizes

So, while eating good quality food is very important, the amount you eat matters, as well. Author Michael Pollan summed it up quite well with a simple quote: “Eat food. Not too much. Mostly plants.”

The problem with portion sizes available in the year 2012, however, is that they blow the whole “not too much” thing right out of the water. 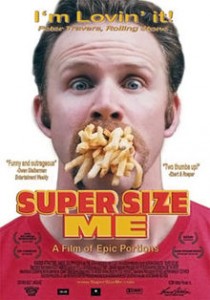 In his 2004 documentary film Supersize Me, Morgan Spurlock took a look at just how much corporate America has influenced nutrition in the Western world, particularly in terms of the health of the foods we choose to eat, as well as the size of portions we now consume. When Spurlock consumed McDonalds for his meals and supersized them whenever it was offered, he wound up eating around 5,000 calories per day. In just 30 days, Spurlock experienced a gross decline in his health and a subsequent rapid rise in his weight.

The problem, however, is that supersize portions have become the norm in Western society. Huge portions aren’t relegated just to fast food- not at all. One 2002 study  printed in the American Journal of Public Health examined historical portion sizes with current portion sizes of marketplace foods and found that the sizes began to grow in the 1970s, grew even faster in the 1980s, and then continued to rise at rates similar to the rise in obesity rates throughout the 1990s and beyond. Interestingly, this phenomenon expands beyond just fast food “supersizes.” It can be found in packaged foods, marketing, and even portion sizes specified in cookbooks.

One of the problems with portion sizes is that a cognitive disconnect exists between serving sizes reported on food packaging and actual portion sizes that wind up on the plate. On food labeling, serving size is typically standardized to a certain measurement (100 grams, 2 ounces, half a cup, etc.) so that shoppers can compare labels relatively easily. Unfortunately, unless you measure your food carefully with a kitchen scale or some other measuring device, chances are that the portion size that winds up on your plate is significantly larger than the serving size called out on packaging. Studies have shown that, lacking some framework for estimating portion sizes, people tend to estimate incorrectly. One Canadian study showed that people tended to overestimate exactly how much food was necessary to make a serving while underestimating the number of servings they actually consumed. The result is supersized portions that cause people to overeat.

In the infographic below,

you can see just how much the average fast food meal has grown between the 1950s and now. This supersizing of our meals affects our perceptions of how much we believe we need to eat. In one fascinating study, scientists judged the change in portion sizes over the past 1,000 years by evaluating 52 paintings of the Last Supper. By evaluating the size of portions on the plates relative to head size, researchers were able to discern just how much portions have grown. Findings suggested plate sizes have increased by about 66 percent and the food portions have grown over 69 percent in the past 1,000 years. Given that technology has made it possible for us to lead lives involving far less physical activity, you can see that there’s a definite reason why we’re getting fatter.

Are You Really that Hungry? If you ask people why they are driven to make the food choices they do, many will answer that they are driven by appetite. Hunger motivation (appetite), however, is far more complex than a simple filling and emptying of the stomach. In fact, researchers have determined that hunger motivation is extremely physiologically and biologically complex. The hypothalamus is the area of the brain that controls hunger, and numerous hormones and chemicals send signals that cue hunger, regardless of how full or empty the stomach actually is. The hypothalamus also determines satiety – that is, when we stop eating. Many factors affect appetite, including psychological cues. Studies have shown that portion size may, indeed, affect our perception of appetite and how much we eat.

Getting Real About Portion Sizes

There’s no doubt that bigger portion sizes lead to bigger waistlines and the attendant health problems that accompany obesity. With so many psychological cues, however, it can often be difficult to be satisfied with a portion size that meets your body’s physiological needs and leaves you satiated. After all, when you’ve got a huge portion sitting in front of you, it’s just so easy to keep eating. Along with eating high-quality, filling plant foods like I’ve outlined in The Beauty Detox Solution, here are some suggestions for reducing and controlling your portion size.