Is Kale Really Bad For You? I’ve noticed a few opinion pieces (like this one in The New York Times) floating around out there suggesting that kale may not be as good for you as previously thought.

In fact, they say, it could actually be unhealthy for you and cause problems for your thyroid.

I can completely understand why there’s concern, but rest assured that there’s no need to panic and swear off kale or any other leafy greens. I’ve eaten kale for almost a decade now with no adverse effects. My thyroid is healthy, my skin is glowing, my hair is healthier than ever, and I feel amazing.

Just because I’ve had no issues doesn’t mean that the anecdotes about how kale has had negative effects on peoples’ thyroids are not true or meaningful, but they’re just that—anecdotes.

Plenty of people have been eating kale for years, just like I have, without any trouble at all. In fact, their health has improved because of it (it hasn’t been called a superfood in the past for nothing!).

Taking the Whole Story into Consideration In many cases, the “kale is bad” stories involve excessive amounts, and the greens haven’t been rotated.

For example, there is the case of an 88-year-old Chinese woman who ate 1 to 1.5 kg (about 15 cups!) of raw bok choy (a type of cabbage, like kale), daily for months in an attempt to control her diabetes. She then developed severe hypothyroidism and fell into a coma.

The theory behind why this happened is a little complicated. First, there was too much goitrin in her system (a result of all that bok choy being broken down), and it hindered the synthesis of the thyroid hormone.

Another issue came from thiocyanate ions (also a result of the bok choy being broken down), which compete with iodine in the body. When the thiocyanate ions interfere with the thyroid gland’s uptake of iodine, that could contribute to hypothyroidism.

However, that is usually only an issue if you already have an iodine deficiency, as mentioned above, something that’s rare in the United States.

One final thing that wasn’t mentioned in the study was what else she ate during those months.

Was she sacrificing other nutrients from other foods in order to consume all that bok choy? Not everyone who really enjoys eating kale eats these amounts of it, so it’s important to dig for the whole story and take the differences between individuals into account when you hear something like, “Kale (or other whole food) causes [insert health condition here].”

It’s often not as clear-cut as it seems. No, I’m not telling you to get your buns to a spin class! I always recommend rotating your greens—and all vegetables, really—because there’s always a possibility of “too much of a good thing” even where healthy foods are concerned.

Anything can be unhealthy when consumed in excess—even water!

Don’t put kale or any specific green in your Glowing Green Smoothie® every single time. It’s fun to mix it up and experiment with flavor combinations anyway. See what’s available locally and play around with your greens and fruit.

Other Imbalances Could Be Contributing

Just as I mentioned above that everyone is different, there’s a chance that an imbalance or health concern in one person could lead to problems from consuming too much kale. Someone without the same or a similar issue may be able to eat the same amount of kale with no problems whatsoever.

If you’ve ever experienced candida, you know that fruit can act like your nemesis. Once candida is no longer a concern, however, fruit no longer comes with a host of nasty side effects when consumed.

When you have candida, is the fruit the problem?

Not really. Sure, the fruit could be a contributing factor to your discomfort, but in reality, there’s more going on. An excess of fat, blood toxicity, or heavy metals could be contributing to the candida, too, and the fruit just makes the issue more obvious.

You can think of kale in a similar way. If you’ve already got a condition that kale could have a little influence over when you eat it, other things in your system could be contributing to the problem.

It’s not that kale is unhealthy.

The Difference Between Juicing Kale and Smoothies Juicing is one common thread between a lot of the cases where kale consumption has been deemed the cause of or contributor to health issues. Juicing is a fantastic way to quickly deliver nutrients to the body, but only in moderation.

There are some cold-pressed organic juices in our Glow Bio cleanses, and I do believe juice can be a good supplement to your diet.

Once you start juicing pounds and pounds of produce and drinking it on a regular basis, you could run into problems. The nutrients are so concentrated and so much juice is usually consumed at one time, you could end up with excess in some areas that may exacerbate pre-existing health conditions.

Think about how much kale and other produce it takes to get a whole glass of juice. Would you eat all that produce at one time?

I encourage the use of kale and other greens in smoothie form, like in the Glowing Green Smoothie®, over juices because they’re not as concentrated and you’re still consuming the whole plant this way, fiber included.

Kale May Not Be the Culprit at All: Causes of Thyroid Dysfunction

Kale is getting a bad rap as if it’s single-handedly the cause of decreased thyroid function when in reality, excess (and I’m talking about tons and tons of excess here!), kale is just bringing an underlying issue to light.

There are other proven causes of thyroid dysfunction, like iodine deficiency.

To add extra iodine to your diet, don’t turn to a shaker of iodized table salt. Instead, try getting more dulse, kelp, chlorella, spirulina, and other sea vegetables. Fluoride intake can also play a role in the efficiency of thyroid function. In a study concerning the effects of fluorine and iodine on thyroid function in rats, the amounts of each interacted in different ways over the course of 150 days.

Sometimes the fluorine stimulated the thyroid and sometimes it decreased its function.

Fluoride used to be used as a treatment for hyperthyroidism. Even tiny amounts of fluoride can affect your thyroid function.

Lastly, there common chemicals many of us are exposed to every single day that could influence thyroid function as well. For example, one study found that a chemical used in carpets and other household products, called perfluorinated chemicals (PFCs) has been linked to adverse changes in thyroid levels in both men and women.

At the root of thyroid challenges, there is still debate over what percentage of the disease is hereditary/genetic versus environment. Either way, it’s clear that are many factors other than kale consumption that could be contributing to and causing hypothyroidism.

I don’t really think kale should be a target, and it definitely shouldn’t be under fire the way it has been or considered unsafe or unhealthy. 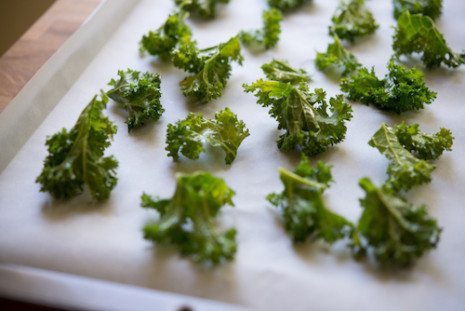 So should you be worried about your kale consumption? Probably not. Unless you already have a health issue that can be exacerbated by green cruciferous veggies or you’re juicing large amounts of kale on a regular basis, you’re most likely fine.

Rotate your greens when blending your Glowing Green Smoothie and the types of salads you make, but adding some kale to your GGS and enjoying kale salad a few times per week should be okay.

Overall, I hope the recent scare over kale will serve to educate people and bring greater awareness to the complexity of health challenges and how dangerous (and unfair), it can be to oversimplify our approach too much.

Especially when it comes to our good and unfairly maligned friend kale, who has been so good to me and others in this community!