It’s not a pleasant feeling, that’s for sure: Your abdominal area is abnormally distended like a balloon— causing the illusion that you weigh more than you actually do — and being so uncomfortable you can’t really fully focus on anything else!

Yes, I am indeed talking about bloating — it can happen anywhere and at any time, and many of you probably still don’t know why it’s happening. “It must have been the sugar!” you think to yourself, “Or maybe it’s the fat?”

Alternatively, maybe you notice that your jeans are fitting a little tighter (or not at all). You’ve been dieting — but somehow managed to gain weight, though you thought you were eating healthy. The nutritional realm is chock-full of claims about which food groups to avoid, and it can get tricky to filter out the noise and figure out what to eat. Certainly, refined sugar and carbs have gotten a bad rap in recent years, but among them having a role in causing bloating and weight gain. Meanwhile, in another nutritional camp, people are convinced that fat is the culprit, so they cut back on it at all costs.

So, does sugar (and carbs in general), lead to bloating and weight gain? Or is fat the issue? Newsflash, beauties: One or the other is not necessarily the enemy on its own… but when the two are combined, they can be a diet disaster.

In other words, consuming high levels of carbohydrates (especially refined carbs) and fat simultaneously in one meal is what is ultimately problematic if you’re concerned about bloating (and weight gain in general).

Don’t stress, though. I’ve outlined some of the confusing claims circulating around the relationship between carbs, fat and your weight, and provided some crucial research that highlights the truth.

Claim #1: “Sugar is the culprit because it spikes your blood sugar.”

Indeed, some are convinced that sugar is the source of all weight gain, and therefore, any and all foods that contain sugar (even in reasonable amounts) should be avoided. For such people, that means even shunning fruit…something I would never do, even if none of my jeans fit and I had to go buy new ones! 🙂

Guess what? Not all sugar is created equal. I eat whole fruit and incorporate it into smoothies on a daily basis (while I was a Blossoming Beauty though, the candida phase of The Beauty Detox Solution, I did avoid all sugar and sweet fruit until my candida was balanced, but that was for a period and not a way of life). Artificial sweeteners, on the other hand, can surely lead to problems. Sugar alcohols (like isomalt, mannitol, and polydextrose) aren’t easily digested because they don’t pass the same way through our cell walls, which leads to bloating (and gas, yikes).

Bananas can actually have the opposite effect due to their potassium content (which helps your kidneys flush out the sodium that has a bloating effect on your body). Oranges, kiwis, and strawberries are also all potassium-rich fruits.

Don’t forget that fruit is also high in both fiber and water, which make you feel full — and staying satiated is crucial to avoid impulsively reaching for unhealthy snacks!

There are several other reasons why you shouldn’t be scared of fruit. Research has shown that vitamins A, E, and C can have an influence on fat mass reduction. Moreover, minerals such as calcium, iron, and zinc have been found to play a role in reducing fat generation. And fruit is one of the best sources of these vitamins and minerals [1]! Not only that, but the foods that have a positive effect on the microbial environment in your gut are ones that are high in dietary fiber and polyphenols. That’s because they can boost the presence of bacterial phyla Bacteroidetes and Actinobacteria, which are dominant in lean individuals while decreasing the amount of Firmicutes and Proteobacteria, which tend to be dominant in people who are obese. Still not convinced?

One study published in The American Journal of Clinical Nutrition determined that higher fruit consumption resulted in greater weight loss over the course of a year [2].

That said, there are some key strategies to keep in mind when you’re reaching for nature’s candy. Are you reaching for an apple or a pear with an already heavy meal? Or combining it with other foods in a snack? Those may be the reasons why you feel bloated — not simply the fruit itself.

When you consume fruit as a dessert after heavier foods, it becomes more difficult to digest (whereas normally it would digest quickly due to its high concentration of water).

As our Beauty Food Pairing Rules state, it’s best to enjoy fruit on an empty stomach, and if you are going to mix them with other foods, opt only for veggies (in the Glowing Green Smoothie®, for example). If you’re looking for more info on this subject, I talk about the link between fat and sugar in Beauty Detox Foods.

Claim #2: “Carbs are the sole cause of bloating and fat storage because they promote insulin production.”

There’s a whole camp of dieters who are convinced that carbohydrates will make them gain weight because they cause the pancreas to release more of the hormone insulin, which is said to increase fat storage.

But before you start steering clear of quinoa, you should know that the research proves it’s a little more complicated than that.

For example, in one six-week trial, 20 subjects were assigned to follow either a ketogenic diet (only 5% carbs) or a moderate carb diet (40% carbs), and guess what? There was no difference in weight loss or fat loss. To boot, subjects on the ketogenic diet reported having less energy and a worse overall mood. Ultimately, the kind of carbs you’re eating as well as the serving sizes will definitely make a difference. We all know starchy legumes like lentils and chickpeas have a whole lot more to offer nutritionally speaking than processed white bread (plus are less likely to spike insulin levels).

And as with any food group, moderation is key. Still, if we take a look back at the diets of our ancestors, we will see that for hundreds of years, many indigenous groups thrived on diets that included carbohydrates, sometimes in high amounts.

For example, among the Kitavans, hardly anyone was obese let alone overweight, and moreover, they had very low insulin levels. The Japanese island of Okinawa boasts the greatest concentration of centenarians (people over 100 years old) in the world, and their diet has always been heavy in carbs such as rice, legumes and sweet potatoes [3, 4].

There’s a big difference between their diets and that of most Americans today, however. And that difference lies in food separation. As Robert Lustig, Professor of Pediatrics at the University of California, San Francisco, explained, our hunter ancestors ate a substantial amount of fat, “which was transported to the liver and broken down by the lipolytic pathway to deliver fatty acids to the mitochondria — the subcellular structures that burn food to create energy [5].” 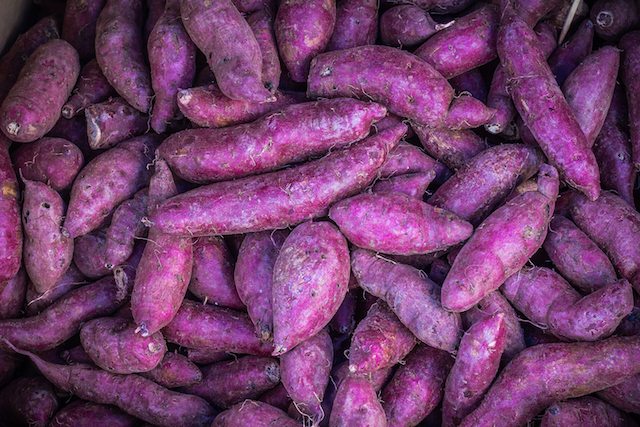 On the other hand, our gatherer ancestors ate carbs, which were also transported to the liver and broken down for usable energy. “Any excess glucose stimulated the pancreas to release insulin, which transported glucose into peripheral fat tissue, and which also caused the liver to store glucose as glycogen (liver starch).

So their livers also stayed healthy.” In other words, either fat or carbs were used as the primary source of energy, not regularly both at the same time. It’s when we began consuming fat and carbs at the same meal that our metabolisms were thrown out of whack. Lustig noted that caused the excess energy to be turned into liver fat (which is the root cause of insulin resistance and drives metabolic disease).

Other research has supported that this is a destructive combination. Some studies, for example, have shown that eating carbs and fat together has an effect that causes us to crave (and ultimately consume), more foods like this — worse yet, making us more likely to overeat [6].

At this point, you may be wondering why it’s much worse to consume these foods together in one meal. Well, remember when we discussed how some people believe cutting carbs means minimizing the release of insulin?

The fact is that insulin is not the only hormone that leads to fat storage. Acylation stimulating protein (ASP), for example, is triggered by the consumption of fat, not carbs. What’s worse is that both ASP and insulin stimulate the release of each other, which is why combining these kinds of foods can cause more damage than when they’re eaten alone. Then there’s glucose-dependent insulinotropic peptide (GIP), which also causes the secretion of more insulin while slowing down fat release, and is set off by both carbs and fat.

In a recent segment on my Beauty Inside Out podcast with me on the science of why combining high levels of fat and carbs simultaneously has such a negative impact, Tony noted how these different types of foods work against each other in the body:

The challenge is that “there’s a degree of competitiveness between them in the body,” he explained. “When you’re eating a lot of fat, your blood tends to be a little bit stickier, which then, when you then have carbohydrates come in, the carbohydrates just don’t get processed as efficiently…then that requires more insulin to actually get the carbohydrates out of your blood.”

While the bloating can be caused by several different factors (including food sensitivities or abnormal gut bacteria), it’s often caused by unusually slow digestion… and as previously stated, carbs and fat can’t be digested efficiently when consumed together.

It sounds logical, right? Not so fast. Time and time again, research has shown that people whose diets are rich in heart-healthy fats like avocados, olives, and nuts are healthier.

In fact, one Prospective Urban Rural Epidemiology (PURE), study recorded the eating habits of 135,000 adults across 18 countries, following their health for more than seven years, and found that those with the highest intake of dietary fat (35% of their daily calories), were 23% less likely to have died during the study period than those with the lowest fat intake (only 10% percent of their daily calories) [7]. Instead, opt mainly for anti-inflammatory, heart-healthy monounsaturated fats (found in avocados, nuts, seeds and olive oil) as well as essential omega fats-containing plant foods such as hemp, chia and flax seeds and green veggies. These fats not only help to keep our hormones in balance and ward off cardiovascular problems but also keep our skin and hair looking their best.

One 2015 study proved that a diet high in monounsaturated fats helped with weight loss and overall improved body composition in women who were overweight [8].

And another study published in the American Journal of Clinical Nutrition compared a diet high in monounsaturated fat to a diet high in saturated fat and found that the former led to a greater increase in resting energy expenditure (in other words, the number of calories you burn daily regardless of your activity level) [9].

So it’s pretty simple, Beauties. There’s no reason to give up sugar/carbs or fat altogether — just follow this one rule: Don’t combine lots of dense fats with starchy foods (combos like cookies, cake, conventional lasagna, cheese enchiladas, etc.), at meals!

Hope this info helped you, and wishing you all the best! Picking some local radishes from farmers. Home grown food is such a blessing!! The next best thing for us non-farmers is to go to support farmer’s markets of course. xo