Drive down the street of any town in America, and chances are you’ll run across multiple fast food restaurants. In fact, there are around a shocking 160,000 fast food restaurants across the country, and the number grows daily. Americans eat out an average of four to five times a week, and a significant portion of those meals come from fast food restaurant chains ranging from McDonald’s to Applebee’s. Families choose these restaurants because they are fast, cheap, and convenient… but at what cost?

Here’s my list of the unhealthiest fast food items and substitutions you can make. 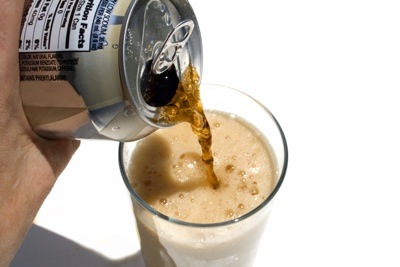 Acidifying, chemical-laden, and loaded with either HFCS or artificial sweeteners (diet varieties), avoid all sodas at all costs. Instead, have some plain water or bring your own. Made from conventional chicken laden with hormones and antibiotics, covered with gluten-containing breading and chemicals like MSG and salt, and fried in cheap, rancid oils, fried chicken is high in calories, fat, and other chemicals that can make you sick. Skip it altogether. Please, please just never eat fried chicken. 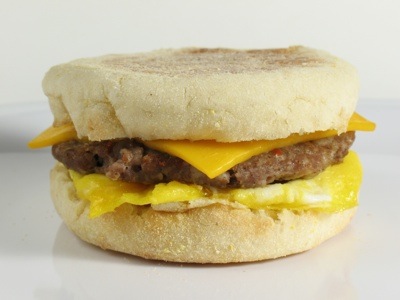 Hormones, salt, antibiotics and dairy make that breakfast sandwich a non-healthful choice. Instead, start your day with a Glowing Green Smoothie. You can make several and keep them in your freezer so you can always defrost one and still have one in a bind. Where do I begin? Fat, calories, and cholesterol are only part of the problem with bacon cheeseburgers, which also contain HFCS (in the buns and condiments), dairy, salt, hormones, and antibiotics. It’s just plain nasty. Instead, opt for a veggie burger or an avocado sandwich. Fries are simply salty unhealthy fat bombs fried in the worst possible rancid oil. Many fast food places now offer alternatives to fries such as a side salad (no dressing!) . Loaded with saturated fat, sugar, conventional dairy, and often chemicals for flavoring, milkshakes can leave you feeling sluggish and sick. Skip them and try one of the smoothie recipes in The Beauty Detox Solution,instead. Take cheese (loaded with fat, salt, hormones and antibiotics), bread it, and deep fry it. How does that even sound as if it might be “food”? Skip them and have some veggie sticks with hummus, instead. Many people select this as a “healthy” alternative in fast food, but it is anything but that. Fish serves as a sponge that mops up all of the toxic chemicals from the sea. Bread it in wheat flour (gluten) and fry it up, and you’re looking at an unhealthy meal. Avoid fish unless you know where it comes from, and opt for a salad instead. 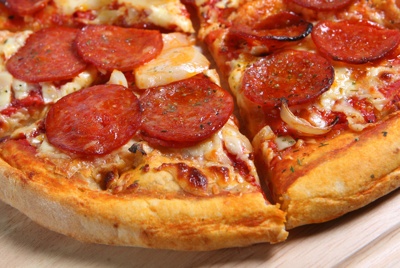 Cheese and white flour combined with nitrosamine-containing salty processed meats, pizza is toxic and unhealthy. Why not try some brown rice or quinoa pasta with tomato sauce instead? Tuna contains mercury, while other additions to the sandwich contain HFCS, dairy, salt, and gluten. Combined with the processed bread it comes on and possibly cheese throw in the mix, it truly is a toxic horror. How about a veggie wrap, instead? 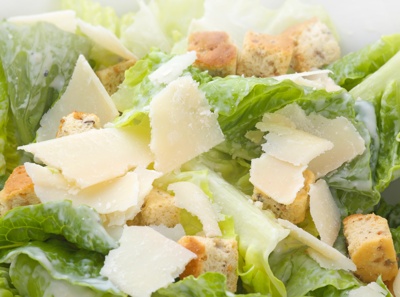 The salad part is okay – it’s everything else, the dressing, cheese, and croutons that are a problem. Caesar salad dressing likely contains salt, HFCS, eggs, and lots of fat. Instead, opt for a naked salad and add a squeeze of lemon and some tomato and mashed avocado for dressing. 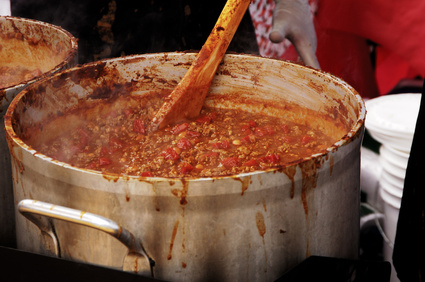 The main concern with hamburger chili is the beef, which is very likely laden with hormones and antibiotics. Fast food hamburger may also contain E. coli and some pretty gross ingredients including artificial color. Instead, have some vegetarian chili or vegetable soup. 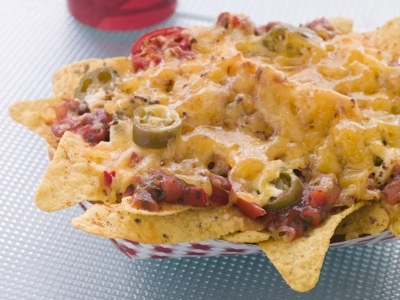 Corn chips loaded with cheese, meat and beans and then dipped in sour cream? Really?? Dairy, hamburger, salt, and GMO corn are just a few of the health issues associated with this high fat, high calorie snack. Instead, have some vegetable sticks dipped in salsa. Shrimp is like other fish, a dirty toxic dumping ground in the ocean for chemicals like PCBs and mercury. Take those chemicals and dip them in flour and salt, and deep fry them and you have a very unhealthy meal, particularly if you dip them in HFCS-laden cocktail or tartar sauce. If you really want fish, try some wild caught Pacific salmon. These sweet bits of dough contain wheat (gluten), sugar, salt, and high-fructose corn syrup. Avoid them and have a piece of fruit. Dessert in fast food places isn’t much better than the main meal. Cheesecake is particularly bad because it not only has sugar, salt, and chemicals, but also hormone-laden dairy. Avoid it, and try some yummy Chia Pudding. 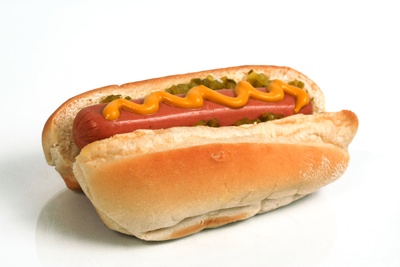 Have you ever read what’s in hot dogs? They are created from “meat trimmings” which may include organs that have been mechanically separated into a paste, blended with salt and other chemicals, and shaped into a hot dog. High in sodium, many hot dogs also contain HFCS and other unhealthy ingredients. Instead, try a veggie sandwich. Many people believe this is a very healthy option because it is low in fat and calories, but teriyaki chicken contains high levels of sugar, sodium, genetically-modified soy, MSG, and other unhealthy chemicals. Try vegetables and brown rice, instead. 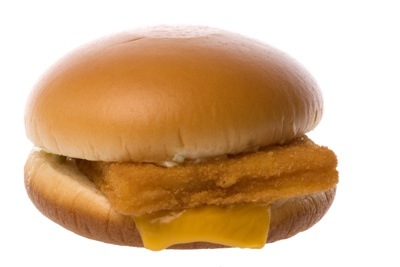 These sandwiches have the same problems as fish and chips – mercury and other chemicals, HFCS, breading, and lots of fat. Opt for a salad with some avocado or a sliced veggie burger on top. The biggest problem in a beef burrito is the beef and cheese. Dairy, hormones, antibiotics – they’re all in there. Instead, have a heart veggie burrito with some rice and beans (hold the cheese) if you are hungry. Beef, chemicals in seasonings, cheese, and fried GMO corn all contribute to how unhealthy this food is. Make a taco salad with black beans and salsa, instead. The mainstay of children around the world, chicken nuggets are terrible for you. First, they are made from mechanically separated conventional chicken (hormones, antibiotics)and then breaded with flour and salt (gluten), and contain copious amounts of corn bi-products. These are going to harm your kids’ health. Instead, offer them almond butter on celery sticks or a hummus sandwich. 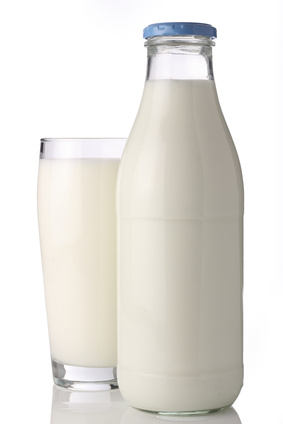 Many parents select milk for their kids as a healthy fast food choice. Milk is filled with hormones and antibiotics, and is very difficult to digest. Instead, drink plain water. 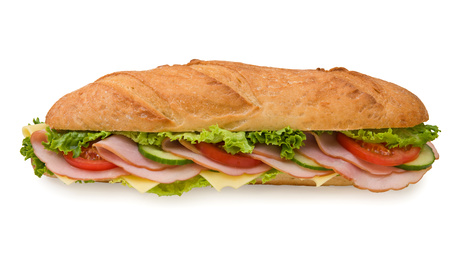 Cold cuts have all kinds of chemicals, lots of sodium, and contaminated animal protein. They are also high in fat, and if you add cheese, dairy. Instead, have a hummus and veggie wrap. Eggs, lunch meat, and fat laden dressing make this “healthy” salad a really unhealthy choice loaded with fat, salt, sugar, and all of the bad stuff that comes in meat. Instead, opt for a hearty green salad with some quinoa or avocado on top. The result of all of this fast food consumption in America is a growing obesity problem. Obesity is on the rise in all sectors and age groups, with youth obesity being of significant concern. Disease is on the rise, as well, and much of it links directly to diet. Rates of type 2 diabetes, autoimmune diseases, and heart disease have all risen as fast food has proliferated in America. A 2009 study printed in the journal Obesity examined the calorie count of the average fast food lunch. On average, the study found customers ate about 827 calories for a single meal, with chicken chains coming in at the highest count (931 calories) and sandwich chains such as subway having the lowest calorie counts (about 750). Clearly, all of those calories are not great for your waistline, but regular readers know I always stress it’s not just about calories-  many of the ingredients used in fast food meals that cause the most concern.

Fast food meals are rife with all kind of unhealthy ingredients, including: High-fructose corn syrup (HFCS) can be found in condiments (mayo, ketchup, mustard), soda, fries, desserts, salad dressings, and bread products. HFCS is a totally artificial sweetener that has been linked to obesity, liver scarring, and type 2 diabetes. Gluten is found in breading, buns, and other bread-like products. Gluten comes from wheat flour, and the human body is unable to process it well. Dairy in fast food meals comes in the form of milkshakes, ice cream, and cheese that are high in saturated fat. The human body does not process dairy well, and it is laden with hormones and antibiotics.

I think it is important to mention here that most school lunches are fast food. The lunches, often “catered” by fast food corporations and are high in sugar, high-fructose corn syrup, dairy, and empty carbs. I strongly suggest parents protect their kids’ health by packing a healthful lunch rather than relying on school lunches, which are essentially fast food meals on a tray.

How to Eat Instead

In The Beauty Detox Solution, I outline a healthy, plant-based diet with plenty of foods for energy to stay vitalized. With some planning and preparation, you can avoid all of those fast food marketing messages and eat well when you’re on the road, as well. Carry chopped veggies or raw almonds with you, and make smoothies you keep in the freezer for when you’re on the run. The times where you may be forced to eat in a fast food restaurant, make intelligent choices by sticking mostly to vegetables or plant-based menu items. Avoiding fast food is important for your health, but it is equally important for another reason, as well.

If you have children, eating fast food can be detrimental to their health. As an adult, it’s up to you to set the example for making wise choices in order to teach your kids to make wise choices for themselves. Regular consumption of fast food is never a wise health choice and can even lead to addiction to this most unhealthy method of eating. Eating fast food should also never be a “reward”, because it teaches kids that eating fast food is a prize. By consistently making choices for your health, you are teaching your child to do the same, a skill that will help them become healthier adults. In the long-run, they will love that you made those choices for them.