EWG Shopper’s Guide: The Smartest Way to Use Your $ to Buy Your Food! Me and the one and only Ken Cook! Environmental superhero, President and Co-founder of the EWG, dad and all around incredible human being that is making the world a better place!!

I have huge respect for the EWG and for Ken Cook, who is the co-founder and President. We really hit it off when Ken came on our podcast, Beauty Inside Out, and we decided to start collaborating in different ways.

Last week, we revealed the 2017 Shopper’s Guide together in Glow! In case you missed it, please check out the super fun video launch here!

I wish it were the case that our government or even big food companies would put our health over profits and wouldn’t allow toxins in our food supply that could hurt us. But sadly, that isn’t the world we live in.

The reality is that big profits rule, and that maximum crop output is boosted by spraying massive amounts of pesticides, herbicides, insecticides and weed killers on the produce that we buy- and then ingest.

The chronic, long-term exposure to pesticides and other such substances can lead to nervous system impairment, hormonal, endocrine and reproductive damage, and more…VERY scary stuff. In order to shop smarter, it is essential we shop cleaner and avoid as much as possible of the destructive, unnatural compounds that destroy our bodies in a stealth way.

And that is why the EWG’s Shopper’s Guide is so important, because it helps us identify the smartest place to put our budget- because if we have a limited food budget but choose organic for the items on the Dirty Dozen list, we can avoid the vast majority of pesticides.

Every year things shift- for instance, last year, pears were #22 on the list and this year they moved all the way up to #6 (!), so it’s important to watch for the yearly release of the Shopper’s Guide. It was truly an honor to be part of the Shopper’s Guide launch, as I believe we really do need to do our own research and take care of ourselves in the best ways possible, with information independent of the government and big business!

I’m not a conspiracy theorist per se, but wow, when you start to peek into the dark side of the collusion between big food business and government, it sure is frightening. And it’s enough to make us run to the hills- and our computers- to look up more independent food research on our own.

The EWG’s groundbreaking research has changed the debate over environmental health. From households to Capitol Hill, EWG’s team of scientists, policy experts, lawyers, communication experts and programmers has worked tirelessly to make sure someone is standing up for public health when government and industry won’t.

Ken is so humble, but he TRULY an environmental superhero! He’s been leading the way to protect our environment and positively influence U.S. food and farm policy in so many incredible ways. For instance, Ken was a principal architect of landmark provisions of the 1985 farm bill that for the first time shifted U.S. farm policy from a narrow focus on maximum crop production to conservation of land, water, wetlands and wildlife.

The legislation was widely regarded as the most important environmental farm policy reform in decades. He went on to co-found EWG, which created an online database of federal farm subsidy payments and recipients that has generated thousands of stories about the nation’s broken farm policies.

Ken and the EWG played a similarly prominent role during the crafting of the 2008 and 2014 farm bills, fighting successfully to add conservation requirements on farms that benefit from federally subsidized crop insurance. In the 1990s, EWG’s research was a major factor in the passage of the landmark pesticide reform law, the Food Quality Protection Act.

The EWG was among the first to draw attention to the health threat posed by the weed-killer atrazine and conducted the first extensive tests for the chemical in tap water in 29 Midwest cities. In the last several years Cook and EWG have been in the forefront of national and state campaigns to require labeling for GMO. 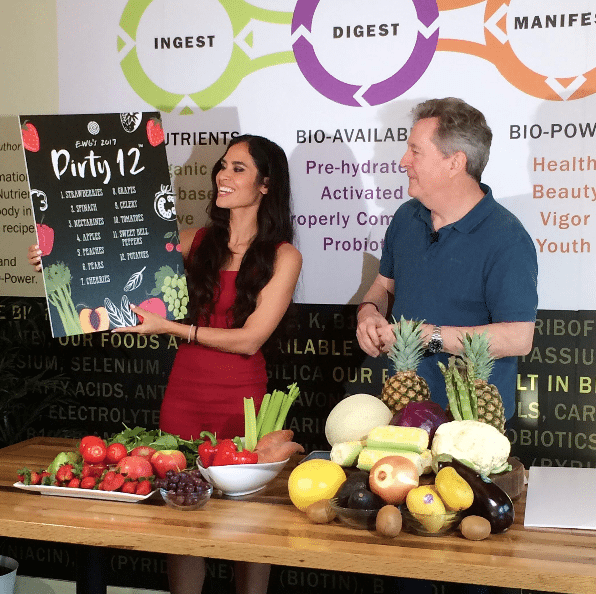 I hope you enjoyed the Shopper’s Guide Launch video and this info. Please use it to shop smarter for you and your loved ones, and help spread the word by sharing this post!

The more we all shop smarter and cleaner and increase demand for organic, eventually the prices will come down and organic will be more readily available for all! 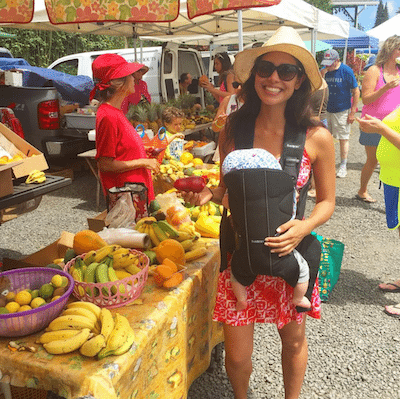 Shop smart and clean and get to know the farmers at your local farmer’s markets where you buy your food whenever possible! (Bubby and I are here at a farmer’s market in Kauai in this pic). xx