Many of you tell me that cooking for your kids is the most challenging thing…period. With picky eaters and some fierce aversions to green veggies, it isn’t always, um, “easy.” But what about having them adopt the the Beauty Detox lifestyle? Many of my clients have children, and I’ve even worked with them and their eating habits as well.

I have a few suggestions that might make getting your kids to eat healthy foods a little easier.

Let Them Help You Make the Food 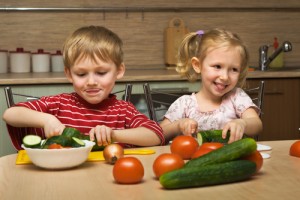 This could be as simple as letting them dump in the pre-measured ingredients into a bowl, but you could also let them hold down the switch on the food processor or season the food to their liking with a line-up of appropriate herbs and spices on the counter. When kids get to help, they’re more likely to want to eat what they helped create. In the very least, they’ll want to try it, which is more than they may have been willing to do if they hadn’t been involved.

Once everything is cooked and/or cut up, you could even set up buffet-style meals and allow them to put together their meals as they want (within reason). Have a salad or a bowl of whole grains for the base and then let the kids add what they want to it—different veggies, pre-cut (and possibly steamed, depending on the dish). Before you know it, the kids will be making you Beauty Detox meals! What a bonus, right?

Letting the kids help you pick out the best ingredients at the grocery store or farmer’s market will teach them to make good choices in their food purchases later on, allow them to follow food from the market to the table, and get them way more interested in the finished product. You may not feel that presentation is especially important on a day-to-day basis when you aren’t entertaining guests, but your kids may respond well to the extra effort. You could try layering different fruits in a glass to make a rainbow and that might be enough to get them started. Even a cute character plate or bowl can do the trick. That has nothing to do with cooking, but everything to do with presentation. In a pinch, simply arrange the food in the shape of a smiley face on the plate. Make a fruit plate with apple slices fanned out as flower petals or a sunshine. You can even freeze a version of the GGS to give it to them in popsicle form. Extravagance and a huge dose of creativity aren’t necessary; taking  just a few seconds to arrange the food could make a difference.

Don’t Keep Junk in the House

If junk food, dairy, breads with gluten, etc, aren’t available, it’s much easier to avoid giving in when they’re asking for a sugary snack instead of fruit or a grilled cheese instead of the dinner you’ve cooked. Pretty soon they’ll get used to the fact that your response to “I’m hungry” is to offer them whole food alternatives to what they might be used to, never anything pre-packaged with refined sugar or far too much sodium. Meltdowns before school will also taper off once they know sugary cereals and frozen waffles are no longer options (they’ll probably behave better in school, too, because they’ll stay full longer and there won’t be a sugar crash mid-morning). GGS and oatmeal, or millet bread toast are great for kids to start the day.

Sure there may be a sulky transition period, but it will inevitably go away over time as long as you stand firm.

When You Can, Pack a Lunch 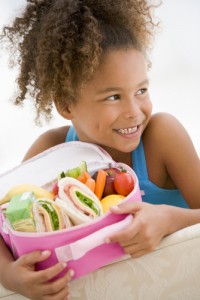 Most schools don’t serve the most nutritious meals and combinations. They still serve milk, cheese, peanut butter, and other foods that aren’t ideal. In some cases, the students as young as kindergarten are allowed to make their own food choices, resulting in a plate of cheesy nachos and some grapes, with chocolate milk to drink! Barely the balanced meal the schools say they want the kids to have.

When possible, pack a lunch. I know on some days, it’s difficult or you’re running behind and it’s easier to pull out lunch money than piece together a meal that doesn’t need to be warm to be enjoyed. Just as you plan ahead for yourself at the beginning of the week so you’ll be less tempted to eat less nutritious food, try making extras of anything you make that can easily be taken to school. Send soup or other hot foods in a BPA-free thermos. Pack a simple hummus and tomato wrap or sandwich on gluten-free bread or wraps. Because nuts are banned in lots of schools, hummus is great idea. Cut up fruit is as well, or an avocado sandwich, if they like avocados.

Finger Foods Are Best at First

I’m a big fan of trying to get the kids to eat what you eat. These foods will be healthy and properly combined, and you won’t have to deal with the extra stress of creating a separate menu for the little ones. My Raw Gorilla Taco Wraps are fun to eat. If the collards are too bitter for the kids at first, you can make them lettuce wraps instead by just substituting romaine for the collard leaves (fill several and wrap them smaller so they’re easier for smaller hands). That small switch may deliver the nutrition their little bodies need without requiring you to come up with a whole separate dish.

Teach Them to Play with Their Food

Teaching your kids to play with their food sounds like the worst advice ever, something that would make your mother and your grandmother cringe. But I’m not asking you to have them smear mashed potatoes all over the table and themselves in order to practice writing their letters in the mush with their fingers. Make dinner or lunch more of a controlled time to explore and yes, even play around just a little. You could make a treasure hunt out of quinoa and vegetables, for example, with the treasure being bits of Beauty Foods like broccoli or bell pepper, and in order to excavate the treasures, they have to uncover (and eat!) what’s on top and around them. In order to earn a small prize or special privilege, they have to gobble up the veggie-treasure, too. This one doesn’t require you to cook a special dish for kids, which is ultimately what you want.

Turn a meal into a game and the kids will forget it’s “yucky” food. I would only use this tactic rarely, when you’re introducing something new, since you don’t want to get into the habit of bribing your kids to eat their dinner! Still, it can help on rare occasions when you’re trying to break past a stubborn boundary.

Start as Early as Possible If your kids are already pre-teens or even preschoolers, their habits are already set in place and may be challenging to break. If you have younger children or plan on having more, start as early as possible with them so eating things like kale and oat groats will never seem “weird.” If you start eating a variety of foods while you’re pregnant, you may be able to affect their tastes before they’re even born. Some say that the mother’s diet while pregnant and breastfeeding influences the variety of foods and types of flavors the child likes later in life, so in order to have an adventurous eater, eat a lot of different things during these stages of your own life. Then you’ll be able to cook almost anything for your kids and perhaps have less resistance.

Incorporate Your Guidelines, Even with Kid Foods

Do they want pasta? Make it gluten-free and top it with sauce made from fresh tomatoes or a pesto. Do they feel like having a smoothie on a hot day? Throw some greens in it (even if you don’t tell them what you’re doing!). Do they enjoy candy bars? Make them those dried fruit and nut bars (these combine okay, but not fresh fruit) in the food processor I mentioned above (I know, that one’s not exactly the same, but it might work after they realize you really aren’t feeding them any more candy. They’ll thank you later!). Make their favorite dishes, but with healthy ingredients (like quinoa pasta and nutritional yeast as mac-and-cheese). You don’t have to do the whole transition at once since that’s one sure way to make them rebel and make your job even harder, but small changes can give you big results and more open-minded kids at meal times.

Most “Kid-Friendly” Foods Aren’t Friendly at All

So much is wrong with what society deems as “kid-friendly” food today, like hot dogs, hamburgers, fries, fruit snacks—oh, I could go on and on! They’re loaded with sugar, artificial colors and flavors, preservatives, and all types of nasty things that affect their physical health as well as their behavior. If you’re feeding yourself quality foods on the Beauty Detox plan, the only natural next step is to extend this consciousness to your children. They don’t need “special” foods. They just need time to adjust to what you’re eating, and that may take a little coaxing and a few tricks along the way. Be strong, all you moms and dads out there! The transition to a new way of eating won’t always be easy for the kids, but it’s so worth it to teach them healthy eating habits now! And  yes, they will thank you later, in their own time. 🙂